The internationally acclaimed All-American Boys Chorus will bring its troupe of young singers to Missouri University of Science and Technology for a “Salute to America” concert. 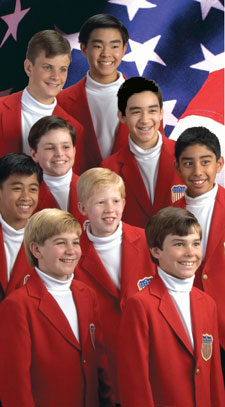 The performance will be held at 7:30 p.m. Monday, April 23, in Leach Theatre of Castleman Hall on the Missouri S&T campus, 10th and Main streets in Rolla. This is the final offering in Missouri S&T’s 2011-12 Campus Performing Arts Series.

Tickets are $35 for adults and $25 for youth. The first 75 tickets for Missouri S&T students are free; additional student tickets are $10. Tickets are available online or from the Leach Theatre Box Office, located in the vestibule inside the main entrance to Leach Theatre of Castleman Hall, facing 10th Street. Box office hours are 9 a.m. to 4 p.m. Monday through Friday. Call 573-341-4219 for more information.

The 32-voice ensemble, whose members range from ages 9 to 14, will present favorites from American’s musical history. Broadway tunes will include “Tonight” from West Side Story, “Ol’ Man River” from Showboat and “Lida Rose” from The Music Man. There will also be medleys featuring the California sounds of The Beach Boys, toe-tapping tunes from the Roaring ’20s, swinging songs from the Big Band era, dynamic Dixieland melodies and jazz classics. A patriotic tribute spotlighting the music of George M. Cohan and John Philip Sousa will also include a stirring salute to past and present members of the U.S. armed forces.