Professor Daniel Shechtman, the current Nobel Prize recipient in chemistry for his discovery of quasicrystals, which turned the science of crystallography upside-down, will deliver the 23rd A. Frank Golick Lecture in Materials Science and Engineering at Missouri University of Science and Technology. 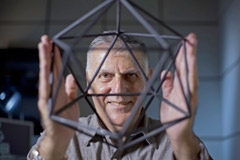 Shechtman, a professor of materials science at Technion-Israel Institute of Technology in Haifa, Israel, will speak on “Quasi-Periodic Materials: A Paradigm Shift in Crystallography” at 7 p.m. Monday, Feb. 13, in Leach Theatre of Castleman Hall, 10th and Main streets in Rolla. A reception will follow, during which attendees may meet Shechtman.

The presentation is free and open to the public, but tickets are required. Tickets, two per person, will be available starting Monday, Jan. 30, from the Leach Theatre Box Office. The box office is located inside the front lobby of Castleman Hall and is open from 9 a.m.-4 p.m. Monday through Friday. The box office also may be reached by calling 573-341-4219 during business hours.

Shechtman will also deliver a technical lecture at noon Monday, Feb. 13, in Room 199 Toomey Hall on the Missouri S&T campus. This lecture is also open to the public but is primarily intended for S&T students and faculty.

Shechtman won the 2011 Nobel Prize in Chemistry for his discovery of a strange crystal structure in rapidly solidified aluminum and manganese alloys. Using an electron microscope, he found that the quasicrystal material consists of atoms packed together in a well-defined pattern that never repeats.

The unexpected appearance of 10 major dots in each concentric circle in the material’s diffraction pattern initially baffled Shechtman and others because it seemed to violate the basic rules of crystallography.

“Crystallography was considered a closed science. There was nothing more to learn,” says Dr. David C. Van Aken, Curators’ Teaching Professor of materials science and engineering at Missouri S&T. “His discovery took a settled science and turned it upside-down.”

Shechtman followed up the initial data, which he recorded in his notebook in April 1982, with other experiments that indicated the material had a five-fold symmetry, a characteristic that was thought to be impossible.

Recent Nobel prizes have generally split credit for scientific advances among two or three people, but the 2011 chemistry prize and the accompanying 10 million Swedish kronor ($1.4 million) went to Shechtman alone. Shechtman, 70, is also a professor at Iowa State University and a researcher at the United States Department of Energy’s Ames Laboratory.

Before his discovery, crystallographers believed that all crystals have rotational symmetry, so that when they are rotated, they look the same. “I told everyone who was ready to listen that I had material with pentagonal symmetry. People just laughed at me,” Shechtman said in a description of his work released by his university.

Two-time Nobel winner Linus Pauling was among those who never accepted the findings. Shechtman said Pauling “would stand on those platforms and declare, ‘Danny Shechtman is talking nonsense. There is no such thing as quasicrystals, only quasi-scientists.'”

Shechtman’s assertions made him an outcast for a few years, but his dogged pursuit of an explanation of his findings eventually put him ahead of other researchers who, as it turns out, had observed similar patterns and data but had too-hastily dismissed the diffractions as being the result of twinned or intermingled crystals. In 1987, friends of Shechtman in France and Japan succeeded in growing crystals large enough for x-rays to repeat and verify what had been discovered with the electron microscope.

About the lecture series

The A. Frank Golick Lecture Series at Missouri S&T is named after a 1918 metallurgical engineering graduate of the university, which was then known as the University of Missouri School of Mines and Metallurgy. It was created in 1969 through a memorial fund established by Golick’s widow, Loree, to attract nationally recognized metallurgical engineers to the campus to interact with the faculty and students, and to present a lecture series.

Golick was associated with several ferrous and nonferrous metal producers during his early career. He developed a number of important new applications for both classes of metals before moving into the marketing field upon joining LaSalle Steel Co. in 1939. His successful career in the steel industry resulted in his appointment as vice president for sales in 1946, a position which he held until his death in 1966.

During his long association with LaSalle, Golick pioneered the market developments of many cold-finished steels and developed successful sales campaigns, which established markets for several steels that are now widely used. During his lifetime he authored many technical articles relating to the use and treatment of steel.

For more information about the public lecture or Shechtman’s visit to campus, contact Amy Moore in the Missouri S&T materials science and engineering department at 573-341-4711 or mooream@mst.edu.