A new book by Jack Morgan, research professor emeritus of English at Missouri University of Science and Technology, offers new insight into the Irish presence in the United States since the Famine. 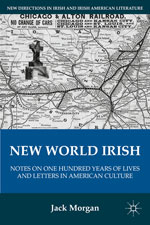 The book, New World Irish: Notes on One Hundred Years of Lives and Letters in American Culture, will be published Nov. 22 by Palgrave Macmillan.

In the book, Morgan examines American writers such as Mark Twain, Henry David Thoreau and Margaret Fuller in terms of their engagements and relationships with the new Irish arrivals in the 19th century.

Eamonn Wall, the Jefferson Smurfit Professor of Irish Studies at the University of Missouri-St. Louis, calls Morgan’s new book “a quite splendid work of literary scholarship.”

Morgan’s previous books include The Biology of Horror: Gothic Literature and Film and Through American an Irish Wars: The Life and Times of General Thomas W. Sweeny 1820-1892.

On November 10, 2011. Posted in Department of English and Technical Communication, News, Top Headlines