Plans to develop the “smart” grid – a system that uses intelligent computer networks to manage electric power – cannot succeed without the creation of new “thinking machines” that can learn and adapt to new situations, from power outages along the grid to fluctuations in the power supply. So says Dr. Ganesh Kumar Venayagamoorthy, a power engineering expert at Missouri University of Science and Technology, in an article published Wednesday, Oct. 12, 2011. 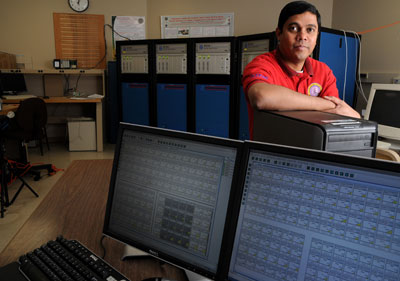 These new machines must take on almost human-like intelligent characteristics, such as the ability to make decisions, adapt to unfamiliar situations, learn from changes in their environments and make sense of how all of the electricity flows through the nation’s power grid, says Venayagamoorthy, a professor of electrical and computer engineering at Missouri S&T.

“And those capabilities, in turn, will depend on subsystems that continuously improve their knowledge of grid dynamics, and not just gather data,” Venayagamoorthy says in an article published in the latest issue of IEEE’s Smart Grid newsletter, published online today.

In his article, Future Grids Will Not Be Controllable Without Thinking Machines, Venayagamoorthy examines the current state of computational intelligence – a field of computing that deals with creating systems that can make decisions “in complex, uncertain and changing environments” – and discusses that field’s potential to give rise to what he calls “computational systems thinking machines,” or CSTMs.

“The research is already well under way” to support the development of thinking machines, he says. “As the smart grid evolves over time, and as we become more dependent on intermittent sources of energy such as wind and solar power, we will see that traditional technology will not work.”

Computational intelligence is the successor to artificial intelligence “and the way forward in future computing,” Venayagamoorthy writes. Adaptive critic designs are based on “a teacher-student framework” in which one part of a computer network (the student) learns from another.

“In combination, CI and ACD technologies can provide a smart grid with capabilities for dynamic foresight, sense-making, situational awareness, rapid adaptation, fault-tolerance and robustness,” Venayagamoorthy writes. For example, when the demand for electricity is low, a thinking machine should be able to dispatch power from wind farms to storage units that can store the excess power for later use.

Venayagamoorthy is the founder of Missouri S&T’s Real-Time Power and Intelligent Systems Laboratory and a principal investigator in the Brain2Grid project, an effort funded through the National Science Foundation’s Office of Emerging Frontiers in Research and Innovation.

Through the Brain2Grid project, Venayagamoorthy is exploring the use living neural networks composed of thousands of brain cells from laboratory rats to control simulated power grids in the lab. From those studies, he hopes to create a “biologically inspired” computer program to manage and control complex power grids in Mexico, Brazil and elsewhere.
Venayagamoorthy is also a senior member of IEEE, the electrical engineering professional society.