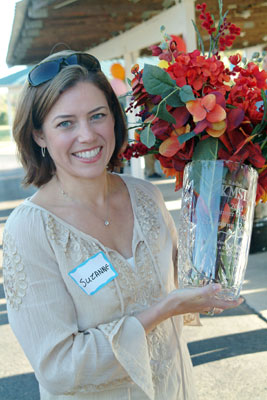 Suzanne Vaughan received the KMST “Volunteer of the Year” award at the station’s annual picnic. Photos by Joel Goodridge.

“Suzanne worked tirelessly with our program manager and production personnel, raising the bar with professionally produced underwriting spots,” said KMST Station Manager Wayne Bledsoe at the picnic, thanking Vaughan for her hours spent recording the spots and serving as guest host. “She is a great individual with a very professional radio voice. We will truly miss her.” Vaughan and husband Jay Goff, former Missouri S&T vice provost and dean of enrollment management, recently moved to the St. Louis area. 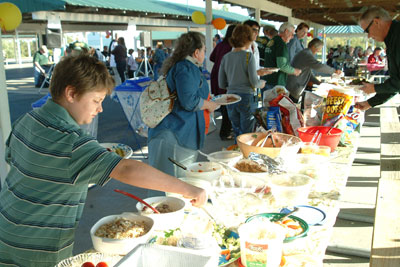 KMST members enjoyed a large selection of foods and desserts, including meats from Swiss Meat and Sausage Company of Hermann, Mo., and chicken from Lee’s Chicken of Rolla.

“Based on food, conversation and fun, this picnic was a great success,” says Joel Goodridge, marketing manager at KMST. “This venue allows our staff to personally thank members for all they do to make KMST the premium public radio station it is.” 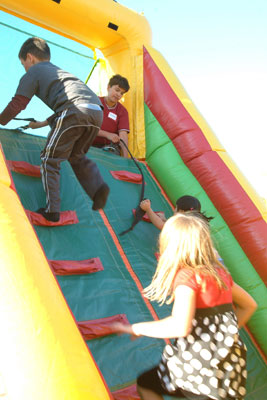 This year’s picnic was sponsored by Fairground Auto Plaza of Rolla. Food was supplied by Swiss Meat and Sausage Company of Hermann, Mo., and Lee’s Chicken of Rolla. Beverages were supplied by Pepsi-Cola Bottling Co. of Rolla. Hi Striker of St. James, Mo., provided inflatables for the kids.

KMST is a 100,000-watt non-commercial, educational station licensed to the Curators of the University of Missouri System. The station is located at 88.5 FM in the Rolla area, 96.3 FM in Lebanon, Mo., and online at www.kmst.org.