There are no agriculture majors at Missouri University of Science and Technology, but some engineering students on the campus have taken up virtual planting and harvesting through the social networking game FarmVille on Facebook. Unlike millions of other Facebook users, however, they’re playing to earn a grade and learn new ways to approach complex engineering problems.

Students enrolled in Engineering Management 382, Introduction to Operations Research, spend one week of the semester-long course playing the game. Farmville rewards players for tending to their virtual crops and cattle, but for these Missouri S&T students it also helps them learn how to make better decisions in business and engineering, says Dr. Ivan G. Guardiola, who teaches the course. 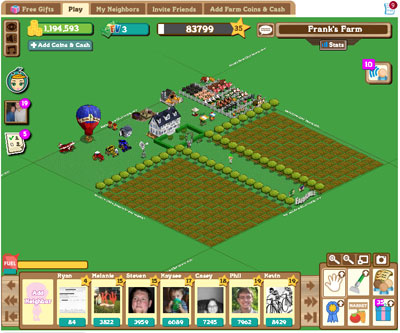 A screenshot of one Missouri S&T student’s virtual plot from the social media game FarmVille.

“The unique attributes of this game make it ideal for presenting the students with a problem that evolves, aims to define the student’s decision-making rationale and allows the student to address conflicting and competing objectives in an environment of continuous change,” says Guardiola, an assistant professor of engineering management and systems engineering at Missouri S&T.

Guardiola created the “FarmVille Challenge” in 2010 as a month-long portion of the course. This fall, he’s trimmed the challenge to one week for the 28 Missouri S&T undergraduate students enrolled in the class. Through the challenge, students compete to see who can earn the most virtual money and gain the most experience.

At the game’s outset, students develop plans, based on mathematical models, to achieve their goals, but may adjust their plan throughout the game as conditions and situations change.

According to Guardiola, the game helps students develop critical thinking and decision-making abilities because it forces them to deal with ambiguous situations.

“In engineering, we use data to make decisions, but that approach has limitations because situations are constantly changing,” he says. “So you have to assess your situation continuously and adjust accordingly.”

The field of operations research grew out of a type of gaming – the war game scenario planning developed during World War II, Guardiola says. “Since then, it has become a well-developed decision science,” he says.

Once Guardiola’s students graduate, they will confront open-ended issues related to logistics, planning and scheduling, distribution “and many other topics that are highly ingrained within our global economy,” Guardiola says.

After incorporating the FarmVille Challenge in his class for the first time in the fall 2010 semester, Guardiola surveyed students about their experience with the game. The majority of students agreed that playing FarmVille improved their critical thinking abilities and increased their engagement in learning the course’s subject matter. But more than one-third of the students thought the game was too time-consuming.