A gift to Missouri University of Science and Technology from Ameren Corp. will provide $50,000 a year for 16 scholarships to build diversity in engineering and science. The gift ranks as the third largest annual scholarship program ever created at Missouri S&T. 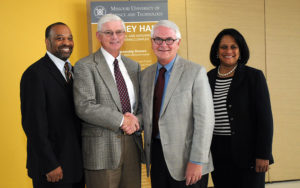 The Ameren Diversity in Engineering Scholarship Program is designed to attract and recruit female and under-represented minority students with financial need into engineering and computer science fields.

“A partner with Missouri S&T for many years, Ameren understands the importance of developing a diverse workforce by creating opportunities for a range of young people interested in pursuing engineering and computer science careers, particularly those who have historically been under-represented in these fields,” says Thomas R. Voss, president and CEO of Ameren Corp. and a 1969 electrical engineering graduate of Missouri S&T. “Missouri S&T is the perfect partner to help us create a more diversified engineering workforce.”

In addition to scholarships, the Ameren gift will create a professional development program that will match scholarship recipients with corporate mentors who will provide guidance to the students in their academic careers.

“The Ameren scholarship program represents an important level of commitment to ensure access to an engineering and science education for all students, especially women and minorities,” says Missouri S&T Chancellor John F. Carney III. “We are grateful to Ameren and Mr. Voss for their generosity.”

The program underscores the importance of building diversity in engineering and computer science fields.

A recent study by the American Society for Engineering Education and the Chronicle of Higher Education found that minority college students represent the only student growth market in the next 20 years, but of all U.S. engineering students fewer than 6 percent are African-American, 8.1 percent are Hispanic and about 2 percent are Native Americans or Hawaiian Pacific Islanders.

With assets of $23 billion, St. Louis-based Ameren Corp. owns a diverse mix of electric generating plants in the Midwest market, with a generating capacity of more than 16,600 megawatts. Through its Missouri and Illinois subsidiaries, it serves 2.4 million electric customers and nearly 1 million natural gas customers in a 64,000-square-mile area.