Missouri University of Science and Technology is one of five universities in the nation to receive a “Chill Out” award from National Wildlife Federation for efforts to promote environmental sustainability through solar housing. 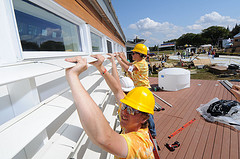 Missouri S&T Solar House Team members reconstruct one of their homes on the National Mall in Washington, D.C., during the Solar Decathlon.Photo by Bob Phelan.

Missouri S&T received the award for developing the Solar Village, a neighborhood of four student-designed and -built solar homes adjacent to campus. Each of the structures, limited to an 800-square-foot roof footprint, was built for the Solar Decathlon, an biennual student design competition held in Washington, D.C. Three of the four homes are now inhabited by S&T students or faculty.

NWF’s Chill Out: Climate Action on Campus awards were announced Wednesday, April 13. Missouri S&T and the other award winners – four colleges and universities and one high school – were cited for “implementing creative approaches to on-campus sustainability.”

“National Wildlife Federation applauds the efforts of these young innovators who are so energized to protect their future and the future of our planet’s natural resources,” says Jeremy Symons, senior vice president of conservation and education for NWF. “The educators and students have proved it is possible to significantly reduce the pollution that is fueling global warming, and they are creating a clean energy workforce that is prepared to help decrease our country’s dependence on oil.”

This was the fifth year for NWF’s Chill Out Awards. Missouri S&T’s recognition came in the category of innovative research and design technology.

Missouri S&T has participated in four different Solar Decathlons – in 2002 (the first year for the event), 2005, 2007 and 2009. Each of the solar homes created for that competition is now part of the Solar Village, which is located on west 10th Street in Rolla, across from the university’s Gale Bullman Multi-Purpose Building.

“It was empowering to see university students of several nationalities come together for one purpose: to prove that solar technology and sustainable construction is a viable option for homeowners of every walk of life,” Williams says. “Throughout the competition and rivalry with other schools, we bring new and exciting ideas to the table that will have a real impact on the world.”