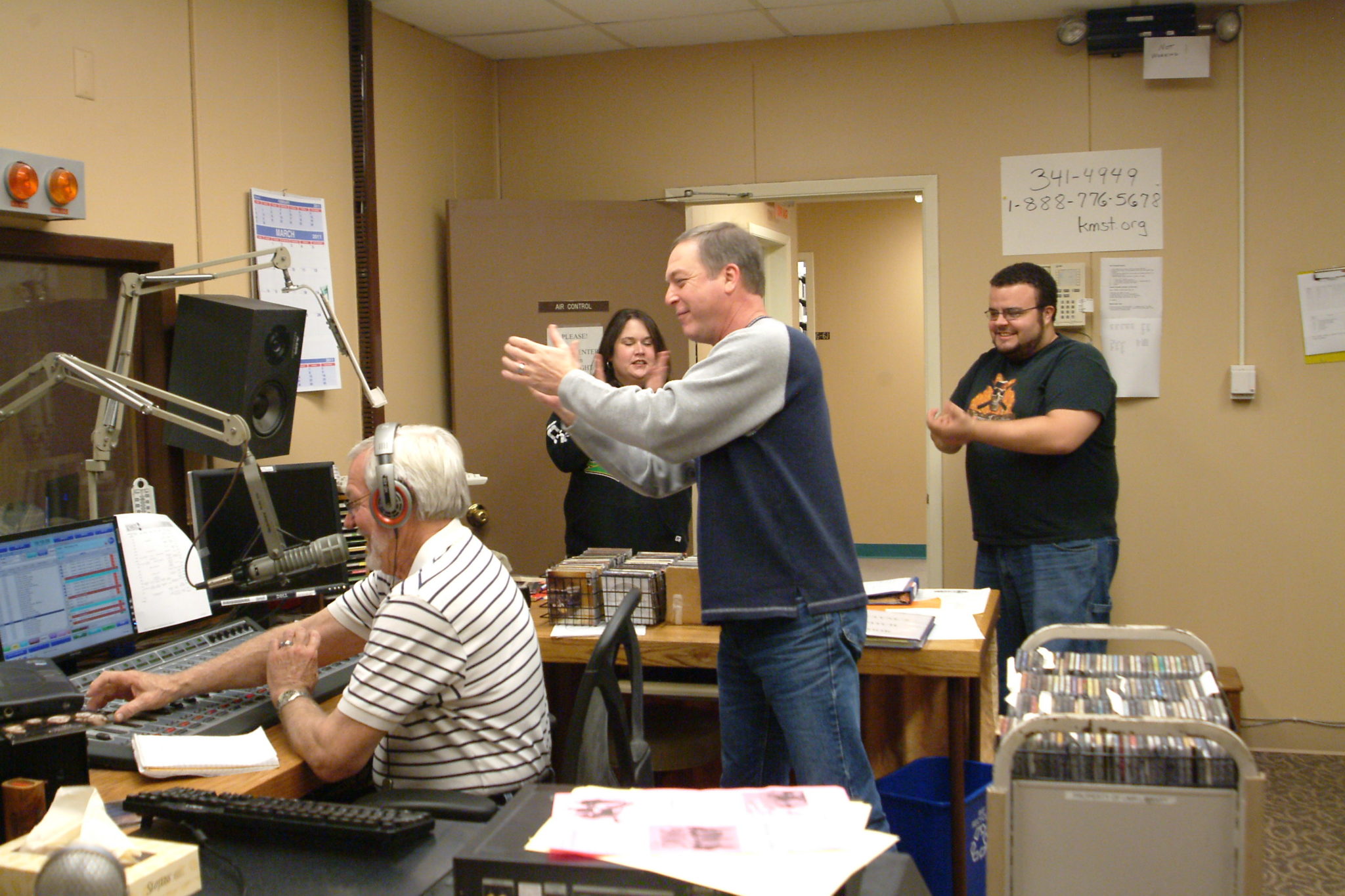 Norm Movitz, host/producer (center, standing), applauds along with Sandy Crouch, administrative assistant, and James Hachmuth, student board operator, as KMST goes over the $60,000 mark, on its way to $70,000. Wayne Bledsoe, station manager, is seated at air-control.

“It was exciting to reach our goal during the last few minutes of the drive,” says station manager Wayne Bledsoe. The pledge brought the total raised to $70,005. “It’s a great feeling to see this type of support for public radio. Reaching our goal confirms the desire of our members to see public radio remain strong during this time of economic concerns.”

KMST gained 66 new members during the drive. New and renewing members from south-central Missouri as well as Internet listeners from Alaska, Alabama, Pennsylvania, Georgia, North Dakota and Florida were included among this year’s investors.

As part of its mission to support other community projects, KMST also raised $4,220 for the Smile Mobile, a mobile dental clinic that provides professional dental care to children age 6-months to 16-years from low-income families. For each pledge received during the drive, the Phelps County Regional Medical Center Auxiliary donated $20 to the Smile Mobile. KMST has held joint fundraising drives in the past, partnering with the Friday Back Pack Program, Wounded Warriors and Fill a Ford.

In addition to financial support, KMST also gained valuable information from its members about programming preferences. This information is reviewed and programming decisions are based on the findings.

According to KMST program director John Francis, it’s vitally important that the station reach its membership drive goals in order to fund the existing programming. “The funds that we raise during our spring and fall membership drives are earmarked for programming,” he says. “These costs tend to rise each year, so it’s really important that we reach our fundraising goals and we did this drive.”

The Corporation for Public Broadcasting and Missouri University of Science and Technology are two of the largest funding sources for KMST. The station also receives support from more than 50 businesses that underwrite programming and dozens of volunteers who assisted before and during the drive.

In its 38th year of service, KMST is a 100,000-watt non-commercial public radio station licensed to the Curators of the University of Missouri System.
KMST offers a mixed format of news from NPR, nationally and locally produced talk shows, and a wide range of music, including classical, jazz, acoustic folk, blues, big band, Celtic, bluegrass and Caribbean. KMST is located at 88.5 FM in and around the Rolla area, 96.3 FM in Lebanon, and is live streamed online at www.kmst.org. Listeners can also follow the station on Facebook.