Posted by Andrew Careaga
On February 9, 2011 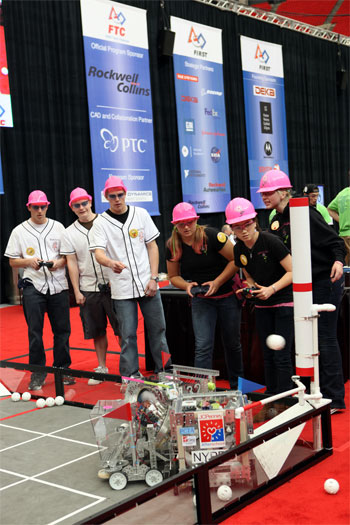 The Missouri FIRST Tech Challenge championship will be held in the Student Recreation Center on the Missouri S&T campus. The center adjoins the Gale Bullman Multi-Purpose Building at 10th Street and Bishop Avenue (U.S. Highway 63).

The FIRST Tech Challenge is a nationwide robotics competition involving teams of up to 10 students between the ages of 14-18 in grades 9-12. Each team designs, builds and programs robots for a tournament-style competition based on competitive sports.

Thirty-eight teams are expected to take part in the Missouri S&T event.

The competition is sponsored by FIRST (For Inspiration and Recognition of Science and Technology), a nonprofit organization founded in 1989 “to inspire young people to be science and technology leaders” through participation in various robotics programs.

Participants in this year’s competition – titled “Get Over It” – will use their robots to score points by emptying baton dispensers filled with 6-inch long PVC tubes and scoring them in stationary and rolling goals.

Winners of the Missouri event will compete in the international championship, to be held April 27-30 at the Edward Jones Dome in St. Louis. St. Louis was selected as the host city for that event for the next three years, just as Missouri S&T was chosen to host the statewide event for the same period.

“The citizens of Missouri consistently demonstrate that they truly understand the mission of FIRST and share our viewpoint on the importance of helping young people reap the rewards and excitement of an education and a career in science and technology,” says Dean Kamen, CEO of DEKA and founder of FIRST. “We are thrilled that Missouri S&T, known throughout the state for innovative engineering programs that, like FIRST, go beyond books and lectures to encourage solutions for real-world challenges, will host the FIRST Tech Challenge state championship.”

“Missouri S&T is proud of our longtime association with FIRST, as many of our current students participated in these robotics competitions when they were in high school,” says Missouri S&T Chancellor John F. Carney III. “Our mission of preparing students to solve society’s technological problems is in perfect alignment with FIRST. We look forward to hosting the FIRST Tech Challenge this year and in the coming years.”