From iPhone apps to energy management, a company founded and run by Missouri University of Science and Technology students is using technology to help consumers cut costs. Next month, the University of Missouri will recognize the company’s three top executives with the university’s Student Entrepreneur of the Year Award for 2010. 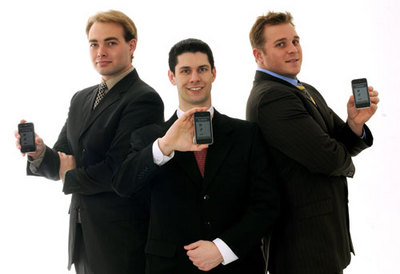 Missouri S&T students (from left) Colby Hall, Michael Orlando and R.J. Miller are the University of Missouri’s Student Entrepreneurs of the Year for 2010.

The company, IDC (Interdisciplinary Design Collaborative LLC), was founded in September 2008 by Michael A. Orlando, a St. Louis native and recent Missouri S&T graduate who is now pursuing his master’s degree in engineering management at S&T. He and two other S&T graduate students – Colby Hall of Imperial, Mo. (an MBA student), and R.J. Miller of Dana Point, Calif. (an engineering management major) – form the company’s executive board.

Orlando, Hall and Miller will receive the award during the UM Board of Curators dinner June 10 in Columbia. The three will share a $2,500 prize from the university.

“We’re very proud of everything that Michael, Colby and R.J. have achieved with this business,” says Missouri S&T Chancellor John F. Carney III. “These three young men truly represent the spirit of innovation we try to infuse throughout the Missouri S&T educational experience, and I heartily congratulate them on this achievement.”

Since launching its first product in 2009 – a free iPhone application that counts down the number of days until the next world-famous St. Pat’s Celebration at Missouri S&T – the company has produced three more apps, all for profit, and won its first federal contract.

IDC’s business model relies on the technological talents of Missouri S&T students who are looking for real-world business experience while still attending school, Orlando says. Some 40 S&T students are involved with IDC at some level, as software developers or performing design, research or development for one of its projects.

Other than the free St. Pat’s countdown app, the company’s other applications for the iPhone include Barcodescan, which uses the iPhone’s camera to scan a product barcode and provide comparison pricing; “Dow in Gold,” which allows users to compare the Dow Jones, NASDAQ and the Standard & Poor’s 500 stock indices to the price of gold; and “Made In America,” which helps consumers find U.S.-made products.

Earlier this year, IDC received a $67,000 grant from the U.S. Environmental Protection Agency through the federal government’s Small Business Innovation Research (SBIR) program. Through this grant, IDC will investigate ways to monitor and optimize home energy usage in hopes of eventually developing technology that homeowners could use to cut energy costs. As a start with this effort, IDC has worked with members of Missouri S&T’s Solar House Team to collect data on energy use in S&T’s “Solar Village,” a small neighborhood of student-built solar homes located near campus. Students live in the Solar Village, supplementing their energy costs via the solar power generated by their homes.

During the six-month life of the grant, IDC will explore the feasibility of an “adaptive energy-management system.” Such a system would run algorithms that suggest ways for homeowners to save energy or execute the energy savings directly.

“A computer will automatically collect and analyze data to determine and locate energy losses and wasted energy in a building,” says Orlando. “These optimization algorithms will learn users’ habits and use historical data to instantaneously analyze building energy needs to reduce energy consumption. By using this information, a home can be managed and controlled more efficiently by manual management (suggesting) and automatic (executing) management.”

If their initial research proves successful, Orlando and his IDC colleagues believe they could be considered for a Phase 2 SBIR award – a two-year, $225,000 endeavor – and develop a marketable technology “within the next couple of years.”

IDC’s SBIR grant is believed to be the first ever awarded to undergraduate students, according to Barry White, director of the Small Business and Technology Development Center at Missouri S&T.

Orlando, Hall and Miller plan to spend the summer expanding the company’s operations to find talent on other college campuses in Missouri as well as on the West Coast. Both Hall and Miller will spend their summer months in California on internships but plan to recruit more entrepreneurial-minded students to the IDC effort, while Orlando will spend his time in Rolla, Columbia, Mo., and St. Louis.

Although the company has offices at S&T’s Small Business and Technology Development Center, Orlando describes the enterprise as “very virtual.”

“We’ll be able to work from anywhere in the country because we’re all mobile,” he says. “It’s very much a virtual office to the max.”