Missouri University of Science and Technology Chancellor John F. Carney III has been selected to receive the Chief Executive Leadership Award from the Council for the Advancement and Support of Education (CASE), District VI. 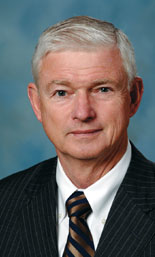 Carney will receive the award at an awards luncheon Jan. 11 during the CASE District VI Conference in St. Louis.

Carney was cited by CASE for leading Missouri S&T through a series of positive changes since his arrival on the campus in September 2005. Those changes include his leadership to rename the campus, formerly the University of Missouri-Rolla. The name change to Missouri University of Science and Technology, or Missouri S&T, took effect on Jan. 1, 2008, and was intended to better position the campus as a nationally recognized technological research university.

Since the name change, the campus has experienced increases in out-of-state applications and continuing strong alumni support during the final years of a $200 million capital campaign.

CASE also recognized Carney for restructuring the campus’s academic organization from a traditional structure of schools and colleges to one that encourages more collaboration among academic departments. He also was cited for promoting the university’s emphasis on energy research and education, and for his leadership with Missouri S&T’s fundraising campaign.

In a letter of support for Carney’s nomination, University of Missouri System President Gary D. Forsee said Carney successfully implemented both the name change and the reorganization because he “managed to create buy-in while quickly, carefully and methodically sharing information with all the key players – from students, faculty, staff and alumni to state legislators and administrators at the University of Missouri System and Rolla’s sister campuses.”

“In every instance, he presented a solid rationale for both transformational processes, based on fact, and communicated his vision and reasoning using a variety of approaches that kept the preferences of the various audiences in the forefront,” Forsee wrote.

“All great leaders have vision,” wrote Darlene Ramsay, former president of Missouri S&T’s Miner Alumni Association, in her letter of support, “but Dr. Carney’s ability to address the potential decline in enrollment and encourage 50,000-plus alumni to enthusiastically embrace a name change to ensure the continued success of our university required the skills of an exceptional leader.”

Prior to becoming chancellor of Missouri S&T in September 2005, Carney served as provost and vice president for academic affairs for eight years at Worcester Polytechnic Institute in Worcester, Mass. He began his academic career as a member of the civil engineering faculty at the University of Connecticut. He served there for 15 years before joining Auburn University in Auburn, Ala., as professor and head of the civil engineering department. In 1983, he moved to Vanderbilt University in Nashville, Tenn., where he served for the next 13 years as professor of civil engineering, associate dean for graduate affairs, and associate dean for research and graduate affairs.

Widely recognized in the research community for his work in the area of impact mechanics, Carney’s research has led to the development and implementation of a series of impact attenuation devices used in motorway safety applications. One of his projects was included in the Better World Project’s 2007 publication “Technology Transfer Works: 100 Innovations from Academic Research to Real-World Application.” Carney holds 10 patents in this area.

In addition, his work with the railroad research community in Great Britain has led to new concepts for improving the crashworthiness of trains. More recently, his research has focused on developing reusable, maintenance-free impact attenuation devices for transportation safety applications. These safety devices are constructed with “smart” materials that restore themselves to their original shapes following an impact, thereby eliminating the need for costly repair operations and associated liability concerns. These reusable devices are now used extensively throughout the United States and around the world. In recognition of his life-long contributions to the field of roadside safety, Carney received the 2007 Kenneth A. Stonex award from the National Academy of Sciences’ Transportation Research Board.