Posted by Andrew Careaga
On December 9, 2009

As Congress considers “cap-and-trade” legislation to reduce greenhouse gas emissions, companies and individuals are scrambling to figure out how to cash in on the process. But many smaller businesses, such as family farms, could become lost in the convoluted maze of carbon credit markets. That’s where the work of a Missouri University of Science and Technology student can help. 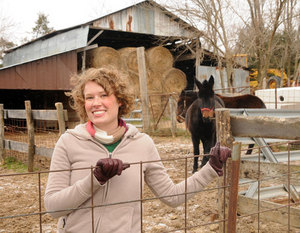 Sarah Seigfreid, a Missouri S&T senior in environmental engineering from Mexico, Mo., has outlined an approach to simplify the process for farmers and others who may want to tap into carbon credit markets but are unfamiliar with the markets. As part of an undergraduate research project, Seigfreid prepared a seven-step approach to carbon-trading in a paper titled “Carbon Credit Process: Inception to Market.”

“A lot of companies want to get in on this now so they can have carbon credits under their belt” should federal cap-and-trade legislation is passed in the near future, Seigfreid says. “Small businesses should get in on this as well.”

Carbon-trading is a process by which companies may earn credits for preventing the release of greenhouse gases into the atmosphere. Firms may then sell their credits through exchange markets such as the Chicago Climate Exchange. The theory behind buying and selling carbon credits is that a free-market approach can reduce greenhouse gas emissions while providing a financial reward for companies that implement carbon-reduction techniques.

Farmers may earn carbon credits in a variety of ways, from capping methane-emitting lagoons to planting trees or adjusting grazing techniques. “Carbon capture on a small farm is a financially attractive thing to do,” Seigfreid says.

Seigfreid, who describes her research as “carbon credits for the little guy,” worked with Dr. Joel Burken, professor of civil and environmental engineering, on the project through the university’s Opportunities for Undergraduate Research Experiences program (OURE). Burken works with small farms and agri-business throughout Missouri to help them lessen their impact on the environment.

The challenge for many farmers, say Seigfreid and Burken, is the lack of familiarity with carbon markets and the process of getting credits to market. The seven-step process they outline is designed to help farmers and other small-business owners navigate the carbon markets.

The first step in the process is to explore available options, then to establish a baseline for measuring the amount of carbon that would be emitted without some sort of carbon-capture method. In her research project, Seigfreid suggests starting with an open lagoon that captures animal waste as the status quo, or “what would have happened had not the carbon credit market made the proposed project feasible.”

The next step is where things get more complicated. In order to get the most value for their efforts, agri-businesses must determine the “additionality” of their process. Additionality is a “murky concept” designed to show that the carbon-capture or -offset method is not common practice. “For instance, a methane reactor on a cattle or hog farm is not ‘business as usual’ and therefore could be classified as an additional aspect of a project,” she writes.

Seigfreid will graduate this month and will begin working for Peabody Energy at the company’s El Segundo and Lee Ranch coal mines in Grants, N.M.