Dr. Jeffery Volz, assistant professor of civil, architectural and environmental engineering at Missouri University of Science and Technology, and his team have received $567,000 to explore how adding carbon fibers could improve the blast and impact resistance of conventional reinforced concrete. The research is funded by the through a cooperative agreement with the Leonard Wood Institute. 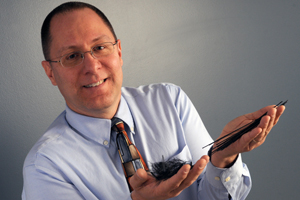 Dr. Jeffrey Volz says long, coated carbon fibers, like those pictured in his left hand, could significantly improving a structure’s ability to withstand blasts, hurricanes and other natural disasters. In his right hand are short, uncoated fibers, which resemble clumps of human hair.

Reinforcing concrete with fibers isn’t a new idea, Volz says. The Roman Empire used hair and straw in their concrete structures and Egyptians mixed straw in clay to make harder bricks. Today short carbon fibers – measuring no more than 1.5 inches – are found in buildings, bridges and slabs to limit the size of cracks. But in the future, Volz says the carbon fibers could be up to 6 inches in length, significantly improving a structure’s ability to withstand blasts, hurricanes and other natural disasters.

“The long fibers will absorb more energy as they pull-out during the pressure wave or impact, cutting down on the potential for failure during an explosion or earthquake,” Volz explains. “The fibers will also significantly diminish secondary fragmentation, reducing one of the leading causes of damage to surrounding personnel and materials. First responders will be able to get to the scene faster because they won’t have to clear chunks of concrete out of their way.”

Coating the fibers can reduce the fibers tendency to form into a ball. The team plans to study a variety of formulas to find a coating that balances between flexibility and rigidity. “A delicate balancing act is required between allowing the fibers to flow easily during mixing yet bond sufficiently with the concrete matrix in the hardened state,” Volz says.

In addition, the team plans to study how a negative electric charge, applied to a polymer coating, could force the fibers to disperse more uniformly during mixing.