Missouri University of Science and Technology was the site Gov. Jay Nixon selected to sign into law two pieces of legislation promoting education in mathematics, engineering, technology and science. 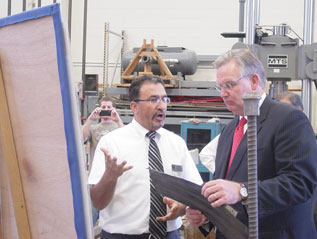 Nixon visited the Missouri S&T campus on Thursday, July 2, to sign House Bill 506, which requires the Governor to proclaim the first week in March as Math, Engineering, Technology and Science (METS) Week each year. The governor also signed Senate Concurrent Resolution Two, which establishes Oct. 3 as Science Day in Missouri. The goal of both pieces of legislation is to encourage Missouri students to explore educational and career opportunities in these fields.

“Preparing Missourians for the careers of tomorrow must begin with a solid education in math and science,” Gov. Nixon said during the ceremony, held in Missouri S&T’s Butler-Carlton Civil Engineering Hall. “These special observances will give teachers, businesses and parents another opportunity to expose young people to these fascinating subjects and encourage the next generation of Missourians to consider careers in these cutting-edge fields.

“I’m proud to sign these important pieces of legislation on the campus of Missouri S&T, which has been blazing the trail of scientific and engineering discovery for generations,” Nixon said.

Prior to signing the legislation, Gov. Nixon toured the high-bay structures lab in the civil engineering building. Undergraduate students, graduate students and faculty use the cutting-edge equipment and instruments in this three-story facility to test and research the latest structural materials and designs.