The open, contemporary structure that now occupies the spot where the Missouri S&T Mechanical Engineering Annex stood for more than a century makes a long-time university priority a reality. Toomey Hall, which will be formally dedicated April 17, mirrors the cutting-edge learning that takes place inside. 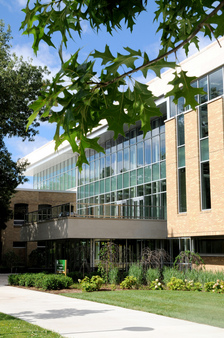 S&T’s new $29 million mechanical and aerospace engineering complex will be dedicated in a public ceremony scheduled for 1:30 p.m. Friday, April 17, in the Brewer Family Atrium. The dedication will include a welcome by Chancellor John F. Carney III, remarks by University of Missouri System President Gary D. Forsee, a video retrospective, and recognition of donors. A reception and building tours will follow the dedication.

Toomey Hall is named for John and Mary Toomey and their children and grandchildren, who gave $5 million, the largest private donation for the construction of the project. The gift is also the largest ever for an academic program at Missouri S&T.

John Toomey earned bachelor of science and master of science degrees in mechanical engineering from Missouri S&T (then known as the University of Missouri School of Mines and Metallurgy) in 1949 and 1951. A decorated Navy pilot in World War II, Toomey is chair and founder of VSE Corp. of Alexandria, Va. He and Mary live in Vero Beach, Fla.

Toomey Hall was funded through $14 million in private and other non-state funding and $15 million through the Lewis and Clark Discovery Initiative. The initiative called for funding capital improvement projects at public colleges and universities throughout the state through the sale of partial assets from the Missouri Higher Education Loan Authority.

Plans for the building were originally drafted more than a decade ago. The project began in 2005 and entailed razing the outdated Mechanical Engineering Annex, which was built in 1902, one year before the Wright Brothers’ famous first flight in Kitty Hawk, N.C., and replacing it with the 80,500-square-foot modern structure. Renovation of the 75,500-square-foot Mechanical Engineering Building began in 2008 and is near completion.

The complex is also the home for much of the Center for Aerospace Manufacturing Technologies (CAMT), a partnership among the U.S. Air Force, The Boeing Co. and S&T to develop new manufacturing methods for the aerospace industry. Established with $18.9 million in federal funding, the CAMT is a multidisciplinary research project involving more than 35 S&T faculty and 120 students and post-doctoral researchers from aerospace engineering, mechanical engineering and other academic fields.