Swing with the Glenn Miller Orchestra on March 16

The most popular big band in the world, the Glenn Miller Orchestra, will perform at 7:30 p.m. Monday, March 16, on the campus of Missouri S&T. The performance is part of the Campus Performing Arts Series and will be held in Leach Theatre. 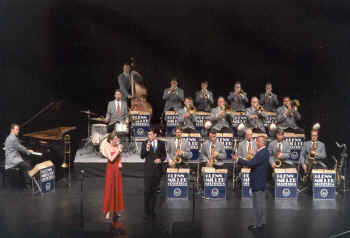 The legendary Glenn Miller was one of the most successful dance bandleaders in the Swing era of the 1930s and 1940s. The Miller Estate authorized the formation of the 19-member orchestra in 1956, and it has been touring ever since. With its unique jazz sound, the Glenn Miller Orchestra is considered to be one of the greatest bands of all time.

In the event that tickets remain for this performance, Leach Theatre will offer discounted tickets through its “Back Row Club,” one hour prior to the event. The seats in the last row of the theater will be sold one hour before the event for $10 each.