The national tour of the Tony award-winning musical revue “Ain’t Misbehavin'” is coming to Rolla. The show, starring Ruben Studdard, the 2003 “American Idol” singing competition winner, will be held at 7:30 p.m. Sunday, April 5, on campus. The performance is part of Missouri S&T’s Campus Performing Arts Series and will be held in Leach Theatre of Castleman Hall. 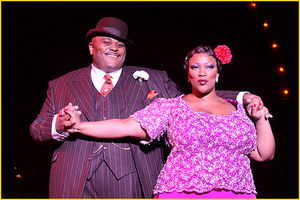 Ruben Studdard and Frenchie Davis. Photo by Jeffrey Richards
Tickets are $40 for adults and $35 for students. The first 100 tickets for Missouri S&T students are free to this event. For more information about the 2008-2009 S&T Campus Performing Arts Series, call the Leach Theatre Box Office at 341-4219.

The performance will be directed by Richard Maltby Jr., the Tony Award-winning co-author and director of the 1978 premiere Broadway production of the show. The story was co-written by Murray Horwitz, with music by Thomas Wright “Fats” Waller.

In the event that tickets remain for this performance, Leach Theatre will offer discounted tickets through its “Back Row Club,” one hour prior to the event. The seats in the last row of the theater will be sold one hour before the event for $10 each.