Colin Bodeman, a junior in mining engineering at Missouri University of Science and Technology, will portray St. Patrick, the patron saint of engineers, during the 101st celebration of St. Pat’s in Rolla. Bodeman is from O’Fallon, Mo. 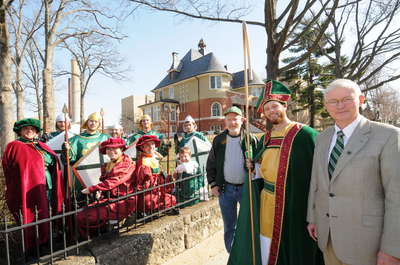 St. Pat and his court will officially arrive in downtown Rolla at noon Wednesday, March 11, to preside over the annual celebration. The court will also participate in formal coronation ceremonies at 9 p.m. Friday, March 13, in Leach Theatre of Missouri S&T’s Castleman Hall. There, honorary knights and student knights will be dubbed and the St. Pat’s Queen of Love and Beauty will be announced.

The 2009 celebration culminates on Saturday, March 14, with the annual St. Pat’s Parade through downtown Rolla. The parade begins at 11 a.m.

The following are members of St. Pat’s court this year: