S&T Miners in Space to weld in micro-gravity

A team of students from Missouri University of Science and Technology is flying high this week, ready to defy gravity while welding.

While onboard NASA’s recently acquired Boeing 727, S&T students will weld aluminum and study its behavior with a goal of improving the speed of space construction. Meanwhile, the aircraft will create a temporary environment of near weightlessness by flying in parabolic patterns. The plane’s choreographed zero-gravity flight maneuvers will create several periods of weightlessness, each lasting less than a minute. 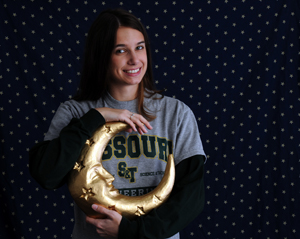 “The team hopes to collect data that will lead to a better understanding of how to weld in space,” says team leader Michelle Rader, a senior in aerospace engineering from Marshfield, Mo. “We have updated our electronics to a computer-based system that will control the robotic system that moves the weld gun across the test strip. Students on the aircraft will start and stop the welding process using a touch-screen monitor.”

The eight-member team is one of 14 given a special invitation by NASA to test the Boeing 727’s ability to support a variety of microgravity projects at Johnson Space Center. This will be the S&T weld team’s fifth trip to Houston, having previously conducted experiments on NASA’s famous “Weightless Wonder” aircraft as part of the agency’s Reduced Gravity Student Flight Opportunities Program.