The Campus Performing Arts Series presents the Formosa Quartet at 7:30 p.m. Wednesday, Jan. 28. The performance will be held in Leach Theatre of Castleman Hall. 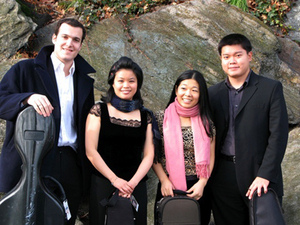 The Formosa Quartet was formed in 2003 when the four founding members came together for a concert tour of Taiwan. Among its numerous awards are the First Prize and the Amadeus Prize at the Tenth London International String Quartet Competition in 2006.
Members of the quartet are established solo, chamber and orchestral musicians with degrees from Julliard, the New England Conservatory, the Cleveland Institute, Curtis, Harvard and Yale. They have performed in major venues around the United States, Asia, Europe, and South America.

In addition to performances of traditional repertoire, the Formosa Quartet has embraced the works of contemporary composers. A reviewer from The Strad magazine says, “their imaginative account of Mozart … is spellbinding,” while a reviewer from Gramophone magazine describes their playing as “remarkably fine both in meticulous response to the letter and in a desire to look beyond the notes.”