Posted by Mindy Limback
On September 7, 2021 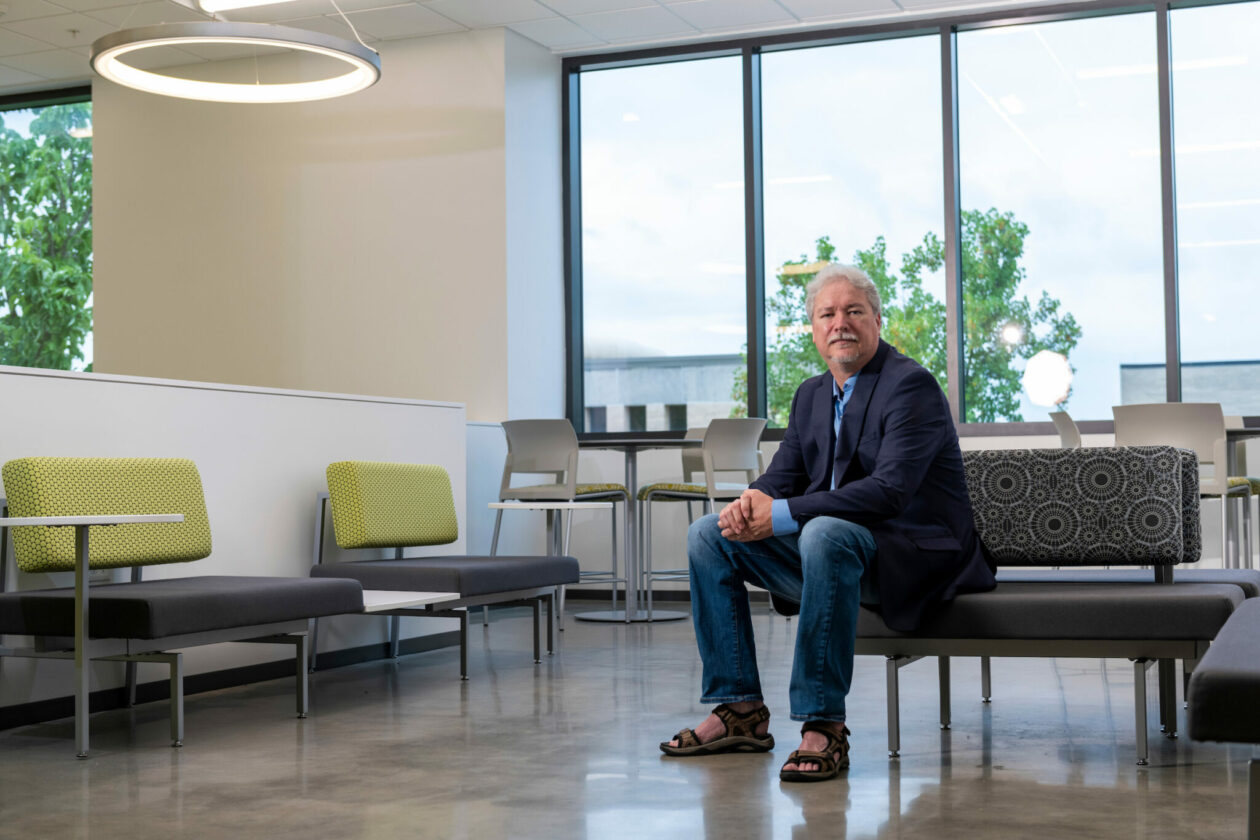 Michael Gueterman graduated in May 2021 with a bachelor’s degree in business and management systems from Missouri S&T. Photo by Michael Pierce/Missouri S&T

In the 1980s, Michael L. Gueterman was a first-generation college student in Ohio when a chance presentation about a new computer science degree program changed the trajectory of his life. Gueterman, who already had a passion for working with computers, switched his major from biology to computer science the same day.

“Little did I know at the time that the program was light on the computer side of things and heavy on the math side,” he recalls.

Gueterman says his interest in obtaining a degree waned over time – partly because his instructors weren’t more experienced with computers and programming and partly because he spent more time in the game room of the student center than he did studying. He started skipping classes and then dropped them altogether.

“At that time, the University of Cincinnati, like other institutions, didn’t have a focus on student success like there is today at S&T,” he says. “You either worked hard and succeeded, or not. I don’t think I ever met with an advisor my entire time. With no one to tell me otherwise, I started working full time as a programmer and just never enrolled for any additional courses.”

For many years, Gueterman was satisfied by working on the technical side of various business applications including manufacturing and enterprise resource planning systems, both as an employee and through his own company, Easy Does It Technologies LLC.

“My company has worked with businesses as diverse as Hertz, The Canadian Campus Retail Association, Integrated Information Systems Inc. (I2S), and the Fort Worth Symphony Orchestra,” he says. “It’s always been gratifying to listen to a customer explain a particular problem they were having and work with them on a solution.”

But after working professionally for a few decades, Gueterman says he was left with many questions about how businesses should be run. In 2018, Gueterman decided he’d try to finish his degree at Missouri S&T and get some answers. He enrolled in S&T’s business and information technology program.

He credits the University of Cincinnati for their effort to make transferring his credits to S&T possible.

“After being away for so long, I was worried that I would need to start completely over,” says Gueterman. “I have to really thank the people at UC for going out of their way to work with S&T on finding paper copies of my records as they no longer – if ever – existed electronically. They even dug up copies of course descriptions and syllabi.”

He says his advisor, Dr. Bih-Ru Lea, an associate professor in the business and information technology department, helped him think through his goals and review his options.

“Without her taking the time to sit down with me early on, I probably would not have become a business and information technology undergraduate,” he adds.

Gueterman says most of his courses at S&T were challenging but not overwhelming.

“As long as your background in the subject matter supports a given class, you study the material and you interact with the professor, you’ll do fine. Don’t skip the prerequisites” he adds.

In May 2021, Gueterman graduated with a bachelor’s degree in business and management systems. He says he couldn’t have done it without the support and encouragement of his family: his sons, Forrest and Alex, and his spouse, Melanie Mormile, professor of biological sciences and associate dean for research external relations for the College of Arts, Sciences, and Business at S&T.

“Without a doubt, my biggest challenge was trying to come to terms with not being on campus for my final semesters due to the pandemic,” he says. “Having the flexibility to learn remotely via Zoom on my own schedule was nice, but it simply couldn’t compare to the level of interaction I had with my professors and other students when we were all together on campus.”

His advice to students or others who might want to return to finish their degree? Ask for help.

On September 7, 2021. Posted in Alumni, College of Arts, Sciences, and Business, Department of Business and Information Technology, Featured