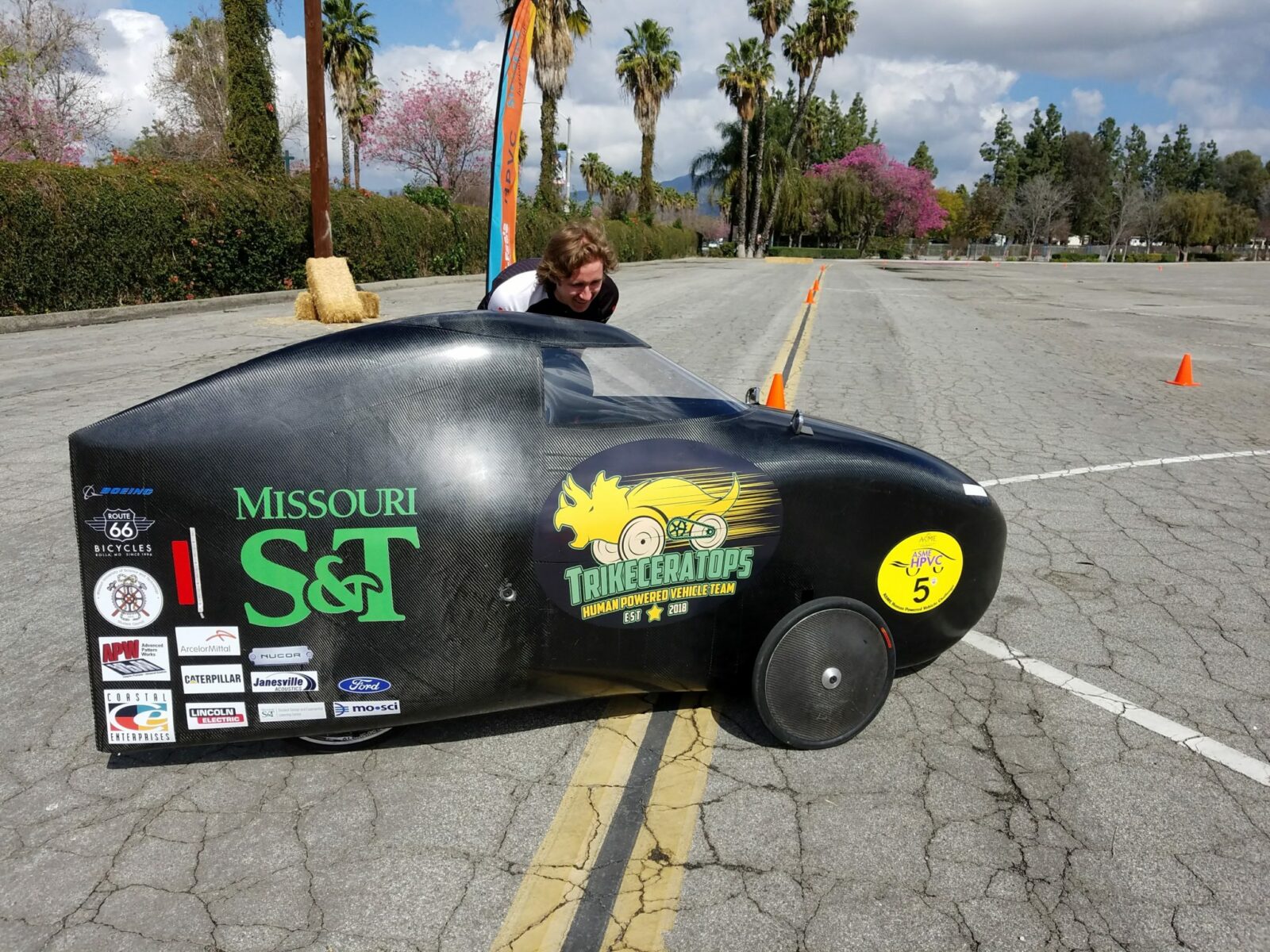 A team of students from Missouri S&T will travel to California this month to race an aerodynamically constructed bicycle as part of the Human Powered Vehicle Challenge (HPVC) West Competition.

The competition will be held March 15-17 in Pomona, California. Missouri S&T’s Human Powered Vehicle Team will compete against approximately 40 other teams from universities from around the nation to design, build and operate a human-powered vehicle for practical urban use.

The competition is divided into four main events. Prior to the competition, the teams submit reports on innovation and design, in which they explain how the vehicle was conceptualized and fabricated.

At the event, a speed competition will demonstrate how fast each team’s vehicle can travel in a head-to-head race against other teams. Teams field both male and female riders.

The final component of the event is the endurance race. This event will place the team’s vehicle in an urban environment. Drivers must maneuver the vehicle through various road obstacles, such as hairpin turns, water hazards and speed bumps. The team will earn points in each category, which will then be totaled as part of its overall standings.

This year’s vehicle is a “leaning” tricycle-style vehicle. The vehicle is built with a lean lock, which keeps the vehicle upright and allows the driver to focus on producing power. The trike has a carbon fiber shell and suicide-style doors that open vertically.

“This year the team has built upon past success with a leaning vehicle,” says team leader Sarah Morrison, a senior in mechanical engineering from Garden City, Missouri. “One of the things we pride ourselves on is that fact that our bike, with the exception of commercial bike parts, is completely manufactured by members of our team in the student design center.”

The following team members will participate at the event:

Joshua Bennett, a junior in mechanical engineering from Manteca, California

Alexandria Doll, a senior in ceramic engineering from Owensville, Missouri

Hope Drennan, a senior in environmental engineering from Columbia, Illinois

Camryn Hays, a senior in architectural engineering from Smithville, Missouri

Tiffany Kuhnert, a senior in mechanical engineering from Springfield, Missouri

Friedrich May, a junior in nuclear engineering from St. Louis

Zac Petersen, a senior in mechanical engineering from Minooka, Illinois

Haley Rehagen, a senior in mechanical engineering from Freeburg, Missouri

Darrin Snodgrass, a senior in mechanical engineering from Battlefield, Missouri

The Human Powered Vehicle Team is one of 20 student-run teams in Missouri S&T’s Student Design and Experiential Learning Center (SDELC). The SDELC, housed in the Kummer Student Design Center, provides real-world team-based operations, including computer design laboratories, a manufacturing shop, office space and logistical support. Design teams mirror small start-up companies that plan large-scale projects, organize into departments, raise funds, communicate their ideas and solve open-ended design challenges. Most teams compete annually against other collegiate teams from across the country and around the world. For more information about the teams, visit design.mst.edu.