Dr. Simon J. Bronner, Distinguished Professor Emeritus of American Studies and Folklore at The Pennsylvania State University (Penn State) at Harrisburg, has been been named the Maxwell C. Weiner Distinguished Visiting Professor of Humanities at Missouri S&T for the upcoming academic year. The visiting professorship was established in 1999 by an estate gift.

Bronner will be collectively hosted between August 2018 and May 2019 by Missouri S&T’s three humanities departments: arts, languages, and philosophy; English and technical communication; and history and political science.

Over the academic year, Bronner will present two public lectures, lead a seminar on campus for early-career faculty in the humanities, and teach one semester-long undergraduate course. He will also be encouraged to participate in S&T’s newly founded Center for Science, Technology, and Society, csts.mst.edu, which brings together scholars from across campus to share ideas about the impact of science and technology upon society, culture and the environment. 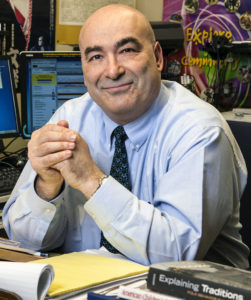 Bronner is an American folklorist, ethnologist and historian. A connecting thread of his varied scholarship is on the issue of tradition, especially in relation to modernity, folk culture, and popular culture and creativity.

“The undergirding theme in my work is the interplay between tradition and modernization,” says Bronner. “This inquiry is particularly appropriate for connecting the backgrounds of students from various majors across the university curriculum at Missouri S&T. I try to use scholarship to address timely public issues as demonstrated in several of my recent publications on the discourse of ‘traditional values’ and technology in relation to the rhetoric of progress in American society.”

Bronner’s major scholarly contributions have been in his authorship and editing of over 40 books and monographs on the the topics of material culture and folklife, consumer culture, ethnic studies, ritual and belief, masculinity studies, American roots music, animal-human relations (in practices such as hunting and gaming), and developmental psychology and culture across the life course. He edited the most comprehensive reference work in American folklife studies, Encyclopedia of American Folklife (2006), followed with the reference work Oxford Handbook of American Folklore and Folklife Studies for Oxford University Press (2018).

During his tenure at Penn State, where Bronner joined the faculty in 1981, he has chaired the American Studies Program, directed the doctoral program in American Studies, founded the Center for Holocaust and Jewish Studies and the Center for Pennsylvania Culture Studies and served as interim director for the School of Humanities. He also has coordinated graduate certificate programs in folklore and ethnography and heritage and museum practice. Most recently, he was scholar-in-residence at the Latvian Academy of Culture in Riga, Latvia, and a Fellow of the Lemelson Center for the Study of Invention and Innovation at the Smithsonian Institution.

“We believe Dr. Bronner is an excellent fit for the Weiner Professorship, and his many diverse interests in American studies and culture will appeal to a wide audience on our campus,” says Dr. Kate Drowne, CSTS director, associate dean of academic affairs for the College of Arts, Sciences, and Business, and a professor of English. “Missouri S&T is delighted to have Dr. Bronner join us for this coming school year, and we look forward to welcoming him to the campus community.”

On May 8, 2018. Posted in Academics & Faculty, CASB Research, College of Arts, Sciences, and Business, Department of Arts, Languages and Philosophy, Department of English and Technical Communication, Department of History and Political Science, News