Finding a place to belong

Missouri S&T is a place where students find their fit, and have opportunities to explore and dig deeper into their passions. S&T Miners are inventive and resourceful, and they know that a Missouri S&T degree will prepare them to solve tomorrow’s grand challenges.

Read on to meet a few Miners and learn about why they chose Missouri S&T.

For the love of S&T 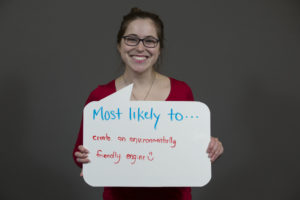 Sophomore Sarah Booth has a passion for the environment and a plan to help improve it. And Missouri S&T is giving her a great start.

“I chose Missouri S&T because it is one of the best engineering colleges in the country,” Booth says. “I took a tour my junior year of high school and immediately fell in love. I knew that if I wanted to succeed, Rolla was the place for me.”

Booth hopes to use her mechanical engineering knowledge to design fuel efficient engines for cars and airplanes that are safer to operate and environmentally friendly.

“College has taught me patience, how to care more about others, and how to work as a team,” she says.

A friend of the environment 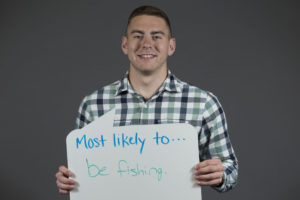 Connor Griffin loves fishing and being outdoors, and his undergraduate research in capturing greenhouse gases will help make that possible for future generations.

“Whether it be small or major, I would like to solve threatening environmental issues to sustain our beautiful planet,” says the chemical engineering junior from Robinson, Illinois.

Griffin appreciates the quality of education he finds at Missouri S&T, but also the cultural diversity.

“I come from a small town in southern Illinois where everyone was pretty much alike,” he says. “Missouri S&T has allowed me to come into contact with people from all over with all different backgrounds. I have learned to be more open-minded and to see an issue from all sides of the spectrum.”

Even though Rolla is four hours from home, S&T’s return on investment sealed the deal for this high school valedictorian when deciding which college to attend.

“I decided to attend Missouri S&T mainly for the quality of education I could receive at a great price,” Griffin says. “There was no other school, even in-state, that could beat the ROI of Missouri S&T.” 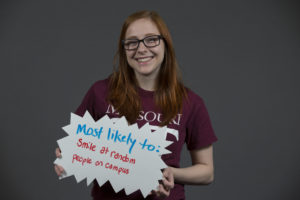 Sarah Holloway was quiet in high school and initially chose Missouri S&T because it was a good in-state option for an electrical engineering student. But when she got to campus, she learned it was so much more.

“I never expected it to have as much of an impact as it has on my life,” Holloway says. “The welcoming environment of Missouri S&T has helped me make lots of new friends and meaningful relationships I never thought I would.”

When she’s not busy with coursework, Holloway stays active as a member of Chi Omega sorority, Student Council, IEEE and Eco Miners.

From tinkerer to engineer 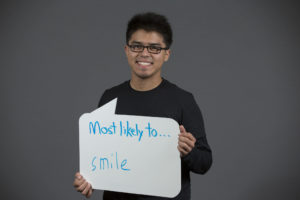 Since his early high school days, Ryan Vasquez has been tinkering with electronics and building things. He already knew he wanted to be an electrical engineer, but his high school didn’t offer any technical outlets. But that’s ok — he found his own way.

“I felt like Missouri S&T could give me the resources and education I needed to succeed,” he says.

Vasquez has already learned as much outside the classroom as he has in one, most recently on a co-op assignment at an industrial design firm.

“I really discovered my passion for electronics design there,” he says. “I also learned about responsibility in the workplace. I quickly had to learn how to be part of many teams and still get my work done. I learned what it means to be accountable.” 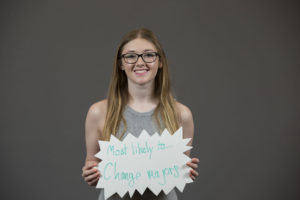 When Missouri S&T junior Emily Bruns of Fenton, Missouri, transferred to Missouri S&T, she was intrigued by the Mars Rover Design Team, but wasn’t sure they would have a need for an economics major.

“I was absolutely wrong, and I have found a new home within my design team,” says Bruns, who works out logistical challenges and design functions as a member of the team’s administrative group. She’s also honing her leadership skills.

“Being on the team has taught me things I would have never learned from just sticking to my major, and I have had the opportunity to help construct parts of the rover, something that would have been way out of my comfort zone before joining the team,” says Bruns. “But that is why I came to S&T, because of the unique extracurricular opportunities that are offered.”

The intersection of art and science 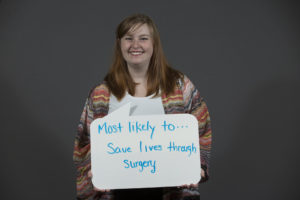 Claire Brewer
Troy, Missouri
biological sciences
Most likely to save lives through surgery

Being a member of the Missouri S&T orchestra has taught Claire Brewer many things about team work and individual discipline — two life skills that will serve her well when she enters med school.

Brewer, a senior in biological sciences, will graduate with minors in chemistry, psychology and biomedical engineering. She plans to become a general surgeon.

“This degree is the backbone of my future, and the future of any potential patient I hope to have,” she says. “Having a background in various fields from my minors will help me look at problems differently to solve.”

In addition to orchestra, Brewer is Vice President of Scrubs, an organization for students interested in a medical profession. She also held officer positions in Phi Sigma and Tau Beta Sigma, and traveled to Spain for a pre-med fellowship through the Atlantis Project.

“All of these officer roles require me to maintain leadership but also to work well with the other members of the executive boards,” Brewer says. “These positions have taught me excellent time management, how to increase my organization and how to take on extra tasks when needed.”