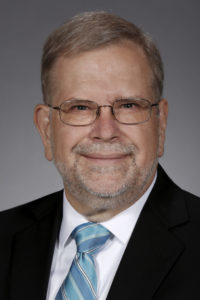 Dr. Richard W. Wlezien, the Vance and Arlene Coffman Endowed Department Chair in Aerospace Engineering at Iowa State University and a former researcher and program director at NASA and the Defense Advanced Research Projects Agency (DARPA), has been named vice provost and dean of the College of Engineering and Computing at Missouri University of Science and Technology.

“Dr. Wlezien is absolutely the right person for the position of vice provost and dean at this critical juncture for the college and the university,” Marley says. “He has a tremendous record of scholarship as well as a proven track record of leading positive change and greater recognition for the programs he has led in the past.”

“We’re excited and delighted to have Dr. Wlezien join our leadership team,” says Dr. Christopher G. Maples, Missouri S&T interim chancellor. “I look forward to working with him as we continue to focus on strengthening our academic and research enterprises.”

Wlezien joined Iowa State as chair of aerospace engineering in August 2010. He also serves as director of the Iowa State Space Grant Consortium, a position he assumed in 2016. Before joining Iowa State, he served as chair of mechanical engineering at Tufts University in Medford, Massachusetts, from 2006 to 2010.

“For me personally, it is a very exciting time to join Missouri S&T,” Wlezien says. “The university has an international reputation as an outstanding engineering and science institution. It has achieved exceptional notoriety by preparing its graduates for successful careers, balanced with attainment of life goals. Throughout its history, Missouri S&T has played a significant role in addressing the world’s grand challenges. In the future, the university will continue to lead the way in both engineering and computing.”

Wlezien began his career at the McDonnell Douglas Research Laboratories, working in jet aeroacoustics, boundary layer receptivity and active flow control for the aerospace company, which later merged with Boeing. He then worked at NASA Langley Research Center, focusing again on active flow control and boundary layer transition to turbulence. At DARPA, he managed the program which led to the first demonstration of reduced sonic boom for a supersonic aircraft and the first flight demonstrations of active flow control. At NASA headquarters, he oversaw programs under which both the highest (Helios at 20 miles) and the fastest (the Mach 10 Hyper X) powered aircraft flights occurred. Upon returning to active research, he has once again focused on active flow control, the physics of transition to turbulence, and viscous drag reduction.

Wlezien’s leadership experience began at NASA Langley Research Center, where he pioneered the Aircraft Morphing Program and led the Advanced Measurements and Diagnostics Branch. At DARPA, he led the Quiet Supersonic Platform Program and the Micro Adaptive Flow Control Program in the Tactical Technology Office. He went on to lead the Vehicle Systems Division at NASA headquarters, where he oversaw all NASA air vehicle technology development across four NASA centers and ultimately established the Fundamental Aeronautics Office.

Wlezien has worked throughout his career to promote diversity through mentoring and hiring practices and establishing a culture of inclusiveness. At ISU, he pioneered a joint capstone design sequence with North Carolina A&T University, in which diverse teams work cross-country toward a common goal. This program has just completed its fifth year under the sponsorship of Boeing.

Wlezien earned his bachelor’s, master’s and Ph.D. degrees in mechanical and aerospace engineering from the Illinois Institute of Technology. He is a fellow of the American Institute of Aeronautics and Astronautics, has served as vice president of education for the AIAA and is the recipient of the NASA Exceptional Service Medal.

“I’d like to thank Dr. Brow for his service as interim vice provost and dean during a time of tremendous transition,” Marley says. He also thanked Dr. John Myers, professor of civil, architectural and environmental engineering and an associate dean of the college, who served as acting dean prior to Brow’s appointment. “Dr. Myers’ service as acting dean was also critical to ensuring the college’s stability and success,” Marley says.

Marley also expressed appreciation for the work of the search committee, which was led by Dr. Kamal Khayat, the Vernon and Maralee Jones Professor of Civil Engineering. “Dr. Khayat and the entire search committee were extremely dedicated and thorough in their evaluation of many well-qualified candidates, and I appreciate their service,” Marley says.