Postdoctoral fellow Steven Berg is pictured in the Aerospace Plasma Laboratory. The S&T alumnus oversees a team of graduate student researchers seeking to advance multi-mode spacecraft propulsion. Such a system would allow small satellites to change course on the fly and react to unforeseen circumstances, from shifting weather patterns to unexpected military maneuvers. Photo by Sam O’Keefe.

It started with a boyhood dream of becoming an astronaut fueled from watching the 1995 Hollywood portrayal of the ill-fated Apollo 13 lunar mission.

It ended – or rather, took a detour – after a teenage growth spurt propelled Steven Berg beyond NASA’s 6-foot-4 height limit for space travelers (the Wentzville, Missouri, native now stands 6-foot-7). The federal agency’s loss is Missouri S&T’s gain, as Berg’s fascination with space led to bachelor’s, master’s and doctoral degrees in aerospace engineering from a campus where he’s now a postdoctoral fellow in the Aerospace Plasma Laboratory under the supervision of associate professor Josh Rovey, his thesis adviser.

After nearly a decade in the department, Berg joined SpaceX in 2015 as a propulsion engineer and test engineer working on the Falcon 9 rocket’s second stage in Texas and southern California. The private company was founded by industrialist Elon Musk with a goal of colonizing Mars. Musk is best known as the creative force behind electric car manufacturer Tesla Motors.

The SpaceX gig was heady stuff for a 20-something engineer, admits Berg, who spent two years as a hurdler and high jumper for the S&T track team. But just months into the new job, when Rovey offered his former pupil the chance to return to Rolla as a postdoc to continue research into multi-mode micropropulsion – and hopefully spin off those efforts into a commercial venture – he didn’t hesitate to trade lunches at Manhattan Beach for a windowless office in the basement of Toomey Hall.

“This may be my only chance to do this,” he says.
———————-
With the help of several graduate student researchers, Berg is seeking to advance spacecraft propulsion by combining its two traditional systems, chemical and electric, into one that can tap into either, depending upon circumstances.

As he explains, “There’s chemical propulsion, which produces a lot of thrust but is not very fuel-efficient. You can get somewhere very fast in space, but you’re limited in how far you can go. And there’s electric propulsion, which uses electromagnetic fields to accelerate ionized gases and is very fuel-efficient. So you can go farther in space, but it’s going to take you a long time to get there.

“Traditionally, propulsion systems have been either one of those separately, but not both. Our propulsion system does both in a single package: one propellant, one tank, one feed line and one thruster.”

The advantage of such a system? The ability to change course on the fly and react to unforeseen circumstances, from shifting weather patterns to unexpected military maneuvers. The dual fuel options are being developed for microsatellites (those under 100 kilograms, or about 220 pounds) and nanosatellites (between 2.2 and 22 pounds), part of a broader category known as small satellites, or “small sats” for short. 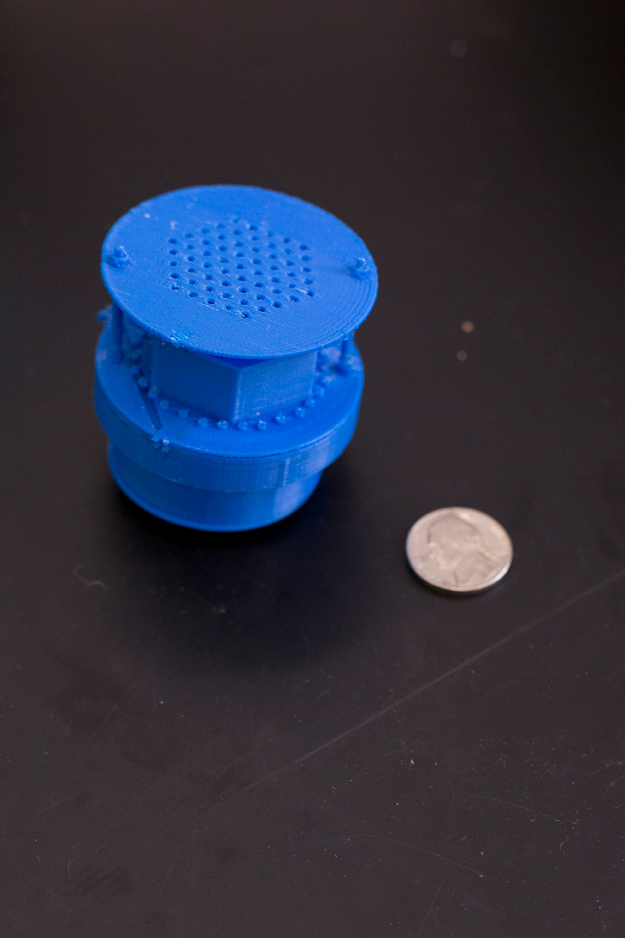 This 3-D printed model of a thruster is the same size as the one currently being designed in conjunction with Berg’s research for a test launch by the student-run Missouri S&T Satellite Research Team, or M-SAT. Photo by Sam O’Keefe.

“Most missions are planned out meticulously beforehand. If you start from scratch and have a mission, you have to select a propulsion system for that mission ahead of time, and design the rest of the satellite in parallel,” he says. “That’s contrary to the primary benefits of small satellites: rapid concept-to-flight time and low cost.

“Our system would save a huge amount of time and money in development costs, since you have the flexibility to significantly change the flight profile as needs arise, or requirements change, without adjusting the propulsion system hardware. You wouldn’t have to retest all the components you design, or redesign all the components you already tested.”

Even with a global downturn in 2016 caused by launch delays, market forecasts for small sats remain bullish.

In its 2017 Nano/Microsatellite Market Forecast, the Georgia company SpaceWorks projects that nearly 2,400 nanosatellites will launch between now and 2023, a growth spurt that some refer to as a “new space race” led by Silicon Valley venture capitalists and Fortune 500 companies.

“What investors are betting on is nothing short of the future of big data, the Internet and global market intelligence all rolled into a suite of orbital technologies,” Fortune magazine declared in August 2015.

The article, titled “Here’s why small satellites are so big right now,” further notes that real time satellite imagery “would allow global corporations to monitor all their assets at the same time and generate high-resolution visual data for individual companies, governments or those trading on global financial markets.”

Berg plans to spend the next year readying for a NASA-supported test launch that will send his thruster into space on a satellite currently being designed by the student-run Missouri S&T Satellite Research Team, or M-SAT.

While fine-tuning the propulsion system in the lab, Berg is also immersed in a crash course on business start-ups.

Working with the university’s technology transfer office, he’s applied for a federal patent for the multi-mode propulsion system, which uses a monopropellant electrospray thruster. He consults with potential customers to assess their needs while also courting prospective investors.

“You have to not only be well-versed in your technology but also be able to explain it to someone who knows nothing about it,” he says. “You really pick their brains to find out what they actually need. And then you adjust your research and development to fit those needs.”

Thanks to his height, Berg won’t ever be able to join the select group of U.S. astronauts. But his detour into aerospace engineering could pay dividends far beyond those dreamt all those years ago by a 9-year-old in a suburban St. Louis multiplex.