Five years into volunteering for the Rolla Rural Fire District (RRFD), Missouri S&T student Chris Franklin thought of one more way he could give back to the department.

Franklin enrolled in Sarah Stanley’s marketing for nonprofits four-­week summer course. The majority of class time was to be spent developing marketing materials for local nonprofit Phelps County Animal Welfare League (PCAWL). But Franklin wanted to promote his fire department, which was, and still is, in need of volunteers.

“The department has a really big recruitment and retention problem,” Franklin says.

“I told him, ‘I’m sure that’s what you want to do, but that’s not the point of this class. The point of this class is to get the maximum benefit (for the nonprofit assigned to the class), with all of our students working toward one goal,” says Stanley, an assistant professor in business and information technology.

So Franklin lobbied for Stanley to choose RRFD as the nonprofit her class could work with next time she taught the course.

And he continued lobbying.

“After the class was over, he was still asking, ‘Are you going to do that?’” Stanley says. “He pushed. He contacted me two or three times throughout the year.”

In the meantime, Franklin brought the idea to the board of the RRFD. The RRFD is a 100 percent volunteer, tax district­-based fire department that serves nearly 15,000 people across a 200-square-mile area in central and southern Phelps County. 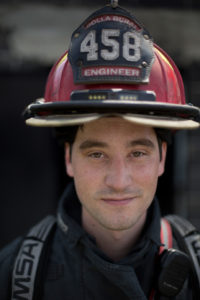 Chris Franklin, a former engineer with the Rolla Rural Fire District, graduated from Missouri S&T in May 2016 with a degree in business and management systems. Photo By Sam O’Keefe/Missouri S&T

Thanks to Franklin’s persistence, Stanley chose RRFD as the nonprofit her class would work with during the summer 2016 semester. Franklin provided her with RRFD Chief Jordan Light’s contact information, and Stanley and Light took it from there.

Stanley has taught marketing for nonprofits at Missouri S&T for four years now, developing web and print materials for a different local nonprofit each time. It usually takes one to two years from when the materials are developed to measure the effectiveness of her students’ work. But, she says that the first two nonprofits her students worked with have since seen donations increase.

And while Stanley says that she won’t be able to gauge the success of her students’ work with the RRFD for at least a year or two, they have already made quite an impression on at least some of the volunteer firefighters.

“I was impressed,” says Jimmy Nash, a senior in mining engineering and volunteer firefighter with RRFD. “They put in a lot of effort for the website, social media, flyers, posters.”

Nash was one of four volunteer firefighters who attended the class’s final presentation.

“I would say the fire department was very pleased with the work,” Stanley says.

That work included a redesigned website, an updated and more active Facebook page, a new Twitter account to capture calls and incidents on the fly, and six flyers and posters aimed at recruiting Missouri S&T students and high schoolers to volunteer.

“They have about 35 volunteers and they’re set up for like 60, so obviously they are hoping for a lot more volunteers, Stanley says. “I really think we will make a dent in that.”

Of course, the project wouldn’t have happened without the persistence of Franklin, who graduated in May 2016 with a bachelor’s in business and management systems.

“Chris was instrumental with us working on the fire house,” says Stanley.

Franklin, a former engineer with the RRFD, is from Saint Louis County, Missouri. He transferred to Missouri S&T in 2009 and started volunteer firefighting with the RRFD in December of the same year. As an engineer, his job was to take care of the trucks and water pumps, make sure the tanker trucks were dropping off water, and make sure the trucks weren’t running out of water.

When Franklin joined, the department had 11 Missouri S&T student volunteers.

“That was back when we were cranking,” he says.

That number has since dwindled to four. 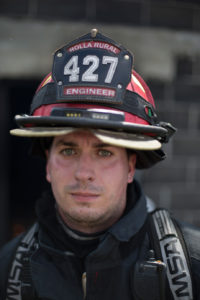 James “Jimmy” Nash, a senior in mining engineering at Missouri S&T, is a volunteer firefighter with the Rolla Rural Fire District. Photo By Sam O’Keefe/Missouri S&T

“School comes first,” says Nash. “(People) at the fire department, especially the chiefs, will tell you the same thing.

“I shut my pager off when I’m studying. That’s what I recommend to any student,” he adds.

So when Franklin took Stanley’s marketing for nonprofits class, he thought working with the RRFD would be a win­-win—the students in the class would get experience not only helping a nonprofit, but a government entity, and the work the students would do would possibly bring more Missouri S&T student volunteers to the department.

“It’s not like we really needed capital intensive things; we just needed sort of a marketing strategy,” Franklin says of the RRFD.

“We just need more hands,” says Nash. “We’re kind of thin right now. We might be lucky to get three (firefighters) to a truck, and that’s kind of the minimum number.

Both Franklin and Nash spoke to the camaraderie developed while volunteering for the RRFD. Nash says that new firefighters should be patient and realize that it takes time to assimilate into the department.

“I think the biggest thing for recruits is that it takes some time to get to know the people there,” Nash says. “If you really want to do good, do like I did, and spend some time up there (at the main station) talking to people and putting a lot of effort into learning the equipment and learning how to do all this stuff.”

But, once you’ve made it, you’re a firefighter for life.

“I can go anywhere in the country, go into a firehouse and tell them I’m a firefighter and be welcomed,” says Nash.

The RRFD does training every Tuesday night at its main station at 1575 Lions Club Drive, Rolla, Missouri 65401. Some, if not all, certifications to become a volunteer firefighter in Missouri can be obtained at no cost, according to Franklin. To request an application to join, go to the RRFD website at http://www.rollaruralfire.com/join.html.