Dr. Joel Burken, professor of civil and environmental engineering at Missouri University of Science and Technology, has been named director of the Environmental Research Center at Missouri S&T. The appointment takes effect April 1. 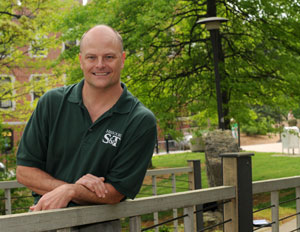 The Environmental Research Center brings together researchers from a wide variety of academic fields to address environmental issues, including those related to the so-called “emerging” contaminants category. Emerging contaminants include chemicals that are becoming of greater concern due to their impact on humans and the environment. They include pollutants from municipal, agricultural and industrial wastewater sources, as well as pharmaceutical and personal care products, to name a few.

A member of the Missouri S&T faculty since 1997, Burken also serves as associate chair of the civil, architectural and environmental engineering department at Missouri S&T. He also served as president of the Association of Environmental Engineering and Science Professors in 2011-2012. In 2007, the organization presented Burken with its Outstanding Teaching of Environmental Engineering and Science Award. The award honors individuals who are making outstanding contributions to the teaching of environmental engineering, both at the individual’s home institution and beyond.

At Missouri S&T, Burken conducts research on how trees and other plants can be used to reduce water and soil pollution while cutting overall cleanup costs. Burken’s work, known as “phytoremediation,” also led to a new method to detect pollutants in the environment by testing plant tissues. That approach is known as “phytoforensics.”

His work in phytoforensics recently received the top 2012 Technology Award from Network for Contaminated Land in Europe (NICOLE) for a project titled “Pollution Investigation by Trees,” which includes 26 international collaborators.

Burken has been honored numerous other times for his teaching and academic pursuits. He received the Rudolph Hering Medal by the American Society of Civil Engineers in 1998 and 2007. In 2000, Burken received a faculty early career development award from the National Science Foundation. He also has been presented with S&T’s Faculty Excellence Award six times, and in 2012 received the Alumni Merit Award from Missouri S&T’s Miner Alumni Association.

Burken earned bachelor’s, master’s and doctorate degrees in civil and environmental engineering from the University of Iowa in 1991, 1993 and 1996, respectively.

One thought on “Joel Burken to direct Environmental Research Center”