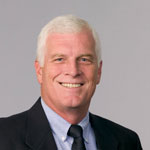 Smith begins his new duties on Feb. 1. He replaces Margaret Cline, who served as Missouri S&T’s CIO from December 2007 until her retirement in 2012.

As CIO, Smith will oversee Missouri S&T’s information technology division. The IT division is responsible for maintaining and supporting the campus’s IT infrastructure, including network and computing systems, telecommunications, database systems, and desktop and server computing. IT also supports campus technology’s use in labs and classrooms, research operations, and business services.

“Greg Smith brings a wealth of IT experience to Missouri S&T,” says Wray. “He’s held leadership positions in the university setting as well as in private industry, has a background in bioinformatics and chemistry, and is a national leader in initiatives related to information technology’s role in higher education. His qualifications and experience make him an exceptional candidate for this position, and I look forward to having Greg join our team.”

Smith was selected following a national search for Cline’s successor. The search attracted 52 candidates, and a campuswide search committee, led by Dr. Donald C. Wunsch, the Mary K. Finley Missouri Distinguished Professor of Computer Engineering, narrowed the field to 10 finalists, then to three on-campus interviewees, before submitting a list of candidates for consideration by Wray and Chancellor Cheryl B. Schrader.

As CIO at George Fox University, Smith led the multi-campus liberal arts university’s implementation of Oracle’s PeopleSoft higher education enterprise resource planning software on time and under budget in 2009. He also strengthened relationships between IT staff and faculty by assisting with the launch of an ABET-accredited engineering program and an online seminary program.

Prior to joining George Fox in 2004, Smith served as director of information technology at the Purdue School of Engineering and Technology at Indiana University-Purdue University Indianapolis (IUPUI) from 1996 through 2004.

Previously, Smith held a variety of IT-related positions in the private sector. He began as the owner of a computer store from 1980 to 1982 in Steamboat Springs, Colo. He then joined Union Oil as a systems analyst in Parachute, Colo., from 1982 to 1984, and became director of computer services for ACZ Inc. in Steamboat Springs, a position he held from 1984 through 1987.

He joined Hewlett Packard in 1987 as a systems engineer. He was a project manager and systems engineer for HP when he left the company in 1994 to become manager of computer operations for Best Access Systems, a position he held until joining IUPUI.

As George Fox’s CIO, he has presented at numerous professional conferences, generally with a focus on current technology disruptions such as mobile computing and educational technology. He also serves on the Learning Initiative Advisory Board of EDUCAUSE, a non-profit organization devoted to promoting best practices in the use of IT in higher education. He serves on the executive board for Northwest Academic Computing Consortium and the Council for Christian Colleges and Universities’ Commission on Technology. He is also chair of GeoAid.org, an organization that provides corporate social responsibility support for communities affected by mining operations around the world.

Smith earned a bachelor of arts degree in chemistry in 1978 and a master of science degree in bioinformatics in 2003, both from Indiana University.