S&T to host lecture on women in computing

Dr. Marie Hicks, assistant professor of history at Illinois Institute of Technology in Chicago, will present a lecture about the history of women in computing at Missouri University of Science and Technology on Nov. 9. 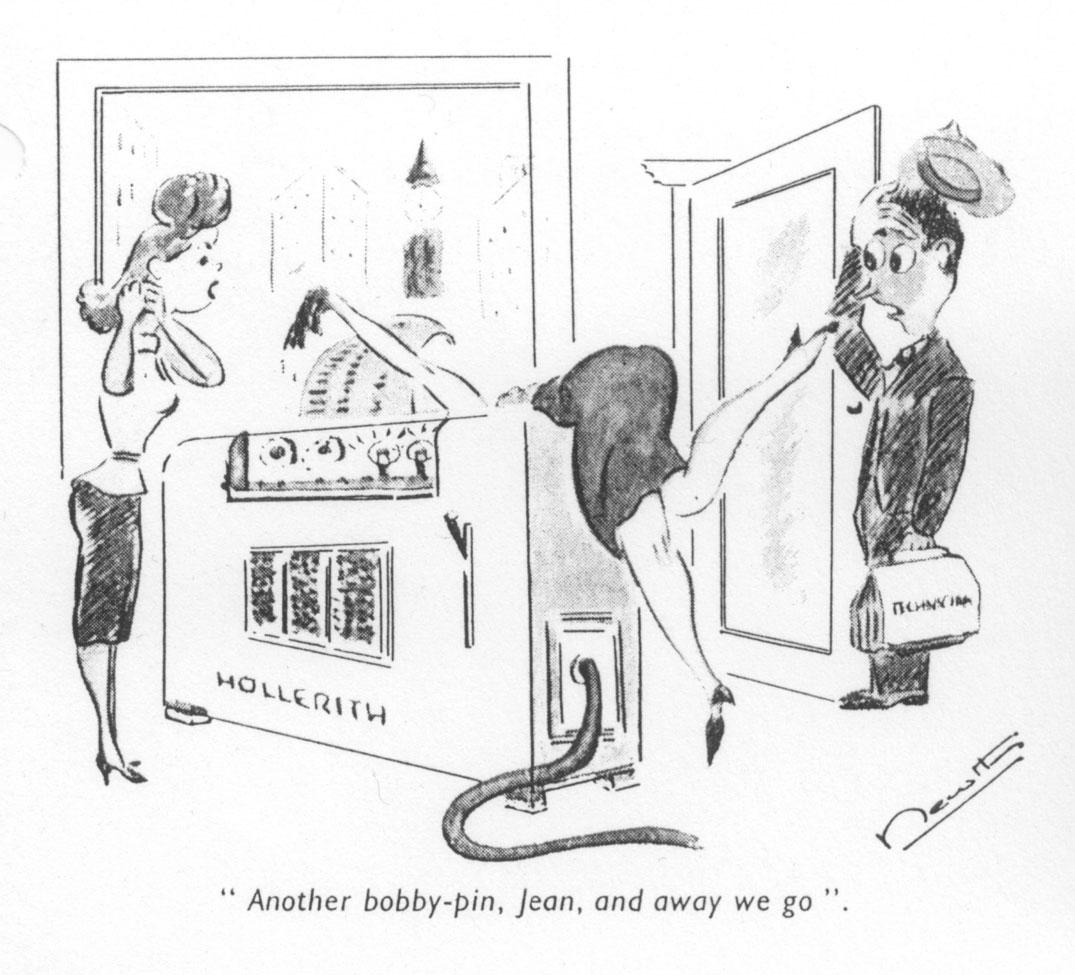 Cartoon from a 1957 issue of the British computing magazine Tabacus. Illustration courtesy of Marie Hicks.

The lecture will be held at 3 p.m. Friday, Nov. 9, in Room 125 Butler-Carlton Civil Engineering Hall. It is free and open to the public.

In her lecture, titled A History of Invisible Workers: Women Computer Operators and Programmers from World War II to the Swinging Sixties, Hicks will discuss the decline of women in computer science and look at how the field may evolve.

“The statistics on women’s declining percentage in computer science are well known, but what is less well known is what the field of computing looked like back when women were more prevalent,” Hicks says.

“Using a variety of images, from personal photos to advertisements and cartoons, this talk will illustrate the impression of the gender makeup of early computing in a way that writes women workers back into the story,” Hicks says.

“Women were often prevalent in images, but rarely prominent in written historical accounts,” Hicks says. “By reconsidering the women workers hiding in plain sight, we gain a different understanding of how computing developed as a field, and where it may go in the future.”

The Nov. 9 lecture is part of a year-long project at Missouri S&T called Beyond Arithmetic, which will explore the complexities of women in science and engineering and the gendered relationships their presence has brought into focus throughout history.

This is the second lecture in the series. An additional lecture and a panel discussion with alumnae and scholars in history, science and engineering fields are planned in the spring.

“Because women had, for decades, been removed from the histories of science and engineering, many times being downgraded or simply forgotten, in the 1970s historians started ‘adding’ them back in,” says Dr. Jeff Schramm, associate professor of history and political science at Missouri S&T and co-organizer of the Beyond Arithmetic program.

“In doing so, however, they continued to use the same timelines, cycles of history, and life-cycle analyses that had been used for men,” says Dr. Kathleen Sheppard, assistant professor of history and political science at Missouri S&T and co-organizer of the Beyond Arithmetic program. “By shifting to examining history using issues that women would have to deal with, historians can ask new questions, for example, what does having children do to a woman’s career historically? How would historical events flow differently because of this? This approach even highlights understudied, but important, events in the history of women as human beings and as professionals.”

For more information about the lecture or the Beyond Arithmetic series, contact Schramm at schrammj@mst.edu or Sheppard at sheppardka@mst.edu.

On November 1, 2012. Posted in Department of History and Political Science, Events, Top Headlines