The walls of the House Lounge in Missouri’s state capitol building in Jefferson City, Mo., come to life with the vibrant, colorful paintings of Thomas Hart Benton. The mural and its creation are profiled in the documentary Tom Benton’s Missouri, which has been re-mastered in a high-definition format. The HD film will premiere around the state this fall for its 20th anniversary. 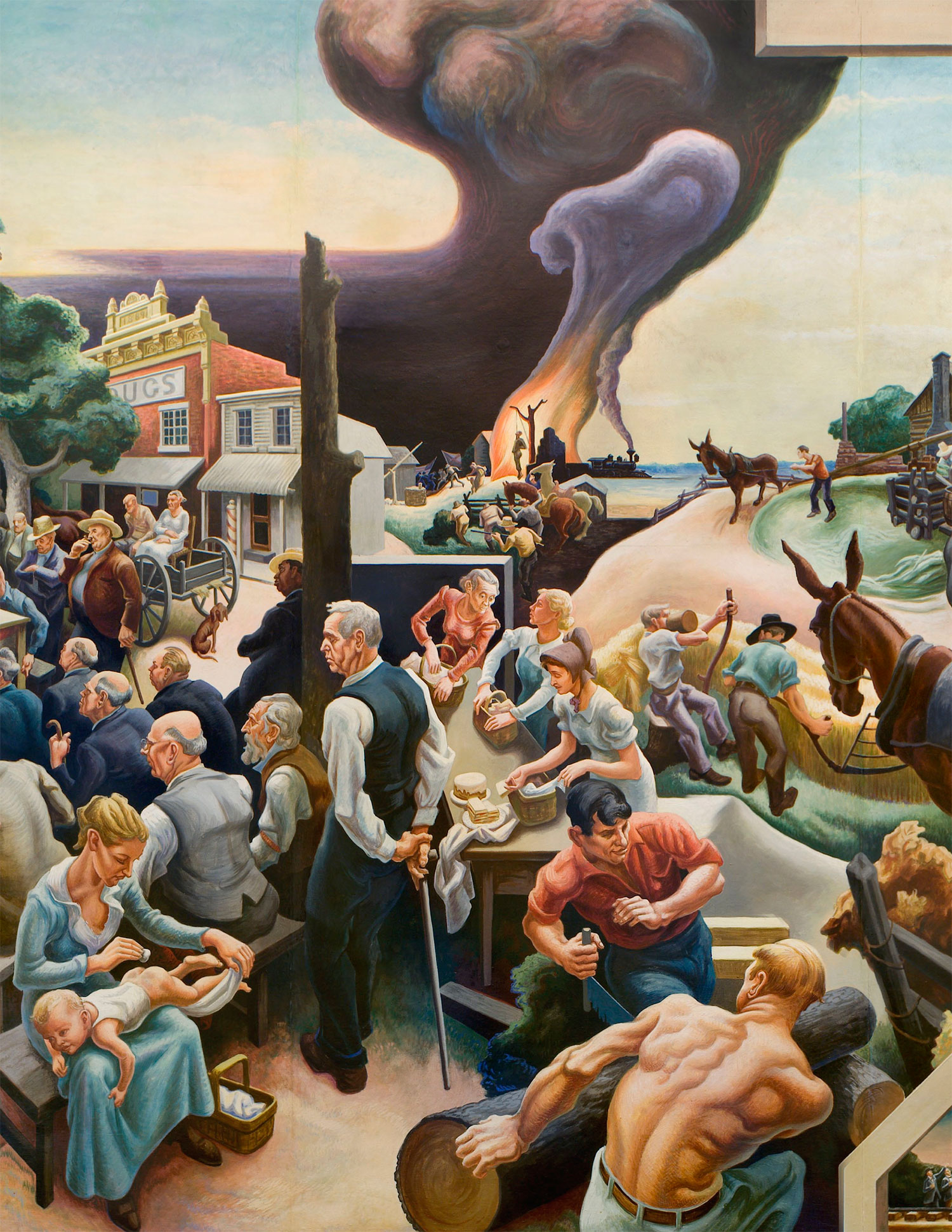 A portion of Thomas Hart Benton’s mural "A Social History of the State of Missouri," which covers the walls of the House Lounge in Missouri’s state capitol building.

The film will be shown as part of Missouri University of Science and Technology’s Fall Film Festival in October. The screening will be held at 7 p.m. Tuesday, Oct. 23, in Leach Theatre of Castleman Hall, 10th and State streets in Rolla. The film series is free and open to the public.

Public screenings will also be held on the University of Missouri’s other three campuses.

University of Missouri-Columbia – 7 p.m. Monday, Oct. 1, in Pickard Hall Auditorium in the UMC Museum of Art and Archaeology. A reception will precede the show at 6 p.m. at the State Historical Society of Missouri.

University of Missouri-Kansas City – 6:30 p.m. Wednesday, Oct. 3, in the Student Union Theater. This showing is sponsored by New Letters.

Originally released in 1992, the award-winning documentary directed by Dr. James J. Bogan Jr., Curators’ Teaching Professor emeritus of art history and film at Missouri S&T, and Frank Fillo, former director of the University of Missouri System’s Cooperative Media Group, was shown widely around the country on PBS stations and exhibited in schools around the state on VHS.

The new version is now available online at tombenton.missouri.edu in a downloadable HD format and includes an educator’s guide that will provide lesson plans, background information on the mural, and lyrics and music from the film.

The restoration of the film included refinements to bring the colors into congruence with the original tempera of the mural. Bogan and Fillo used 16 millimeter film instead of videotape to make the original movie because film does a better job of capturing the boldness of the mural’s colors, Bogan says.

“Film is truer to the colors Benton used, like the red-orange of Frankie’s dress” in the panel that portrays the mythic “Frankie and Johnny” shooting in a St. Louis barroom, Bogan says.

“We wanted to try to recreate for the viewer the experience of standing in the House Lounge and looking in wonder at this mural,” says Bogan. “We hope that seeing the film in high definition will be like looking through the eyes of a sensitive and knowledgeable spectator.”

“The mural is intended to portray a variety of people involved in their natural, daily activities that did not require being polite,” Bogan says.

“Collaboration between campuses, professors and students, as well as the teachers of Missouri, has been the name of the game in refitting ‘Tom Benton’s Missouri’ for another generation of students – and for all Missourians,” says Bogan. “Missouri S&T, the University of Missouri-Columbia, and the UM System president’s office have combined talent and resources so that this vivid and evocative film can be seen by everyone. The digital technology employed will make it downloadable for free to anyone who cares to see it.”

“The Educator’s Guide to ‘Tom Benton’s Missouri'” was a collaborative effort of Luce Myers, lecturer in art at Missouri S&T, Kathleen Unrath, associate professor of art education at UMC, and Abbey Trescott, a teacher at Rock Bridge High School. It contains lessons in art, music, history and communication arts that are customized to suit students from 4th grade through college.
“This comprehensive study guide is full of interdisciplinary and cooperative learning lessons focusing on three enduring ideas found in the Benton murals – power, story and regional social identity,” says Myers. “It includes Missouri National History Standards for 4th grade and is a good companion for teachers who want to make that history come alive.”

Fillo, co-director of the original film, coordinated the section on music, which now offers some of the best recordings available of Bob Dyer’s songs about Missouri history. Gerald “Jack” Brown, a senior in civil engineering at Missouri S&T, and Jessica Hicks, an art education student at UMC, served as research assistants on the project.

“Benton was once asked, ‘Why do you paint murals?'” Bogan says. “His answer? ‘Because I can put more stuff in them.'”

On September 28, 2012. Posted in Department of Arts, Languages and Philosophy, News, Top Headlines