Steve Malott, vice chancellor for administrative services at Missouri University of Science and Technology since February 2001, will retire from his position on Aug. 1. 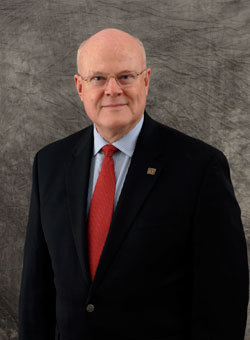 Malott will begin a new position as chief administrative and financial officer for the American University of Iraq, Sulaimani. His wife, Leslie Malott, has accepted a faculty appointment to teach mathematics at the university.

“Steve has been a tremendous leader for Missouri S&T, overseeing a broad array of administrative functions, including budgeting, planning, business operations, environmental management and the campus’s physical plant,” says Chancellor Cheryl B. Schrader. “Both Steve and Leslie will be greatly missed here at S&T, and we wish them well on their new endeavor.”

Malott joined Missouri S&T in February 2001 following a career as a foreign service officer with the U.S. State Department. Within the state department, Malott held positions of progressively more responsibility overseas and in Washington, D.C. His last assignment prior to joining S&T was as administrative counselor at the U.S. Embassy in Prague, Czech Republic.

“Missouri S&T is a wonderful institution, and it has been a sincere pleasure to work with so many great people on this campus,” says Malott. “I’ve been pleased to lead an administrative services team that has accomplished much to make the university a more welcoming place for our students even in the midst of budgetary challenges.”

In addition, Malott coordinated efforts between the campus and the Missouri Department of Transportation to improve University Drive as an entryway to campus from Interstate 44. He also facilitated substantial improvements in campus appearance and landscaping and the accreditation of the S&T police department by the International Association of Campus Law Enforcement Administrators in 2011. Most recently, Malott facilitated the planning for the geothermal energy project that is now under way. By the time that project is completed in 2014, the new system will provide energy to 15 buildings on campus and cut energy use by 50 percent.

Malott also oversaw construction management projects including the construction of S&T’s Residential College, Toomey Hall (the mechanical and aerospace engineering complex) and the Kummer Student Design Center, among other facilities.

One thought on “Vice Chancellor Steve Malott to retire Aug. 1”