Researchers at Missouri University of Science and Technology are bridging a gap between an ancient structural element and modern technology. 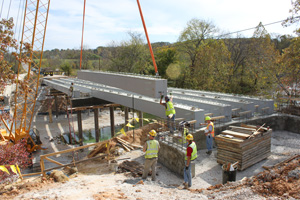 The Douglas County bridge, which opened to traffic in December 2011, carries Highway 76 over Beaver Creek just outside Jackson Mill.

Led by Dr. John J. Myers, S&T researchers are working with designers at HC Bridge Co. to combine an ancient concrete arch form – dating back to the Roman empire – with a composite shell to create bridge beams that are designed to last 100 years. Tucked inside durable, fiberglass composite shells, the lightweight beams are supported by a concrete arch and anchored by seven wire tendons, which serve as the system’s tension tie.

“The composite shell protects the system from the elements, extending its service life and reducing the maintenance expenses that might normally be needed in a traditional bridge girder,” says Myers, associate professor of civil, architectural and environmental engineering at Missouri S&T. “It also serves as a formwork for the construction of the concrete arch system.”

The system uses a high-performance concrete, known as self-consolidating concrete, which can flow easily into tight and constricted spaces without needing vibration to remove trapped air or allowing the coarse aggregate to separate from the cement paste.

Using advanced concrete materials and composites for bridges and other infrastructure applications has been a key focus for Myers, who was recently appointed to serve a three-year term on the Federal Highway Administration’s Long-Term Bridge Performance Program Expert Task Group Advisory Committee. 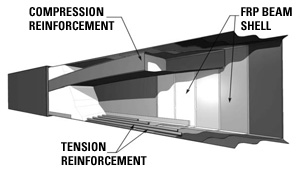 Tucked inside durable, fiberglass composite shells, the lightweight beams are supported by a concrete arch and anchored by seven wire tendons, which serve as the system’s tension tie.

At the end of the project, the three new bridges will be located in Douglas, Dade and Reynolds counties. The bridges will be funded in part by the Missouri Department of Transportation’s Safe and Sound bridge program, which is currently replacing or rehabilitating more than 800 of the state’s poorest bridges.

Habor Technologies in Maine was commissioned to manufacture the composite shell and housing for the beams. Myers says the technology is flexible enough to allow for the arch’s self-consolidating concrete to be poured either at a precast facility or at the job site directly.

“Quality control is often better at a precast facility since the concrete is batched in a very close proximity to the beam,” Myers says. “It’s also often more cost-effective to pour at that type of facility because these bridges are in a rural part of the state.”

The first two bridge beams were cast at a ready-mix plant in Mountain Grove, Mo., and a precast plant in Virginia, respectively. The final bridge will involve placing concrete at the job site after the beams are erected into place.
“In all cases, lower capacity cranes can set them in place because it’s a lighter weight, more efficient structural system,” Myers adds.

Myers and two S&T graduate students are working on the project with Dr. Glenn Washer, associate professor of civil and environmental engineering at the University of Missouri-Columbia.