Researchers working on a future power grid for the nation envision a network similar to the Internet. Under this scenario, users and utility companies interact to share and swap energy from distributed systems, much like computer users tap into the web to transfer files.

But just as malicious Internet users try to spread harmful viruses through computer networks, attackers on the future power network could cause outages and other harmful disruptions that might disable portions of the so-called smart grid. 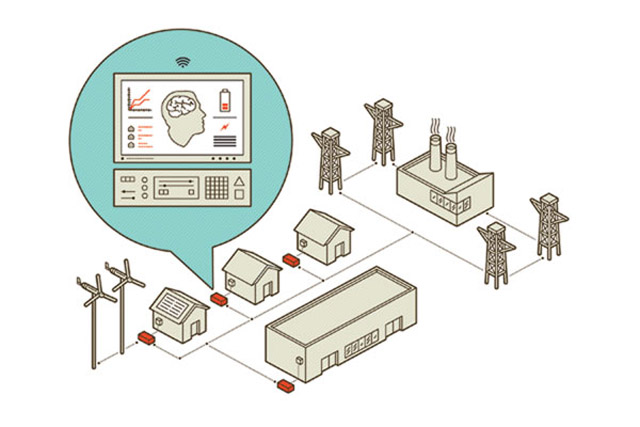 Researchers envision a future smart grid where homeowners, businesses and utility companies share power across an “Internet for energy” network. Distributed grid intelligence, or DGI, will allow homeowners and businesses to monitor their energy use and buy and sell power. Taken together, the monitoring systems of all homes and businesses in a particular area make up the DGI.

A small group of computer science researchers at Missouri University of Science and Technology are applying their expertise in cyber-security issues to try to prevent such a disaster.

The computer science department at Missouri S&T is one of only a few in the nation working on smart grid cyber-security issues. And the university, as a member of the National Science Foundation’s FREEDM Systems Center, is among the nation’s leaders in the field. Ultimately, the computer scientists’ research could result in technology that stands between a major disruption and a secure source of electricity for future businesses and homeowners.

Their work also adds a new twist to the field of cybersecurity.

“Most people think of cybersecurity as something that happens in a computer network,” says Tom Roth of St. Louis, a Ph.D. student in computer science and one of the Missouri S&T researchers on the project. “We’re usually concerned about who can access our data.

“But on the smart grid, we’re not actually dealing with mainstream cybersecurity,” he says. “We’re looking at what an attacker could do to the physical side of the system to compromise security. For instance, a malicious resident on a smart grid could affect the stability of the power network in such a way that it could cause a blackout.

“We’re concerned about information disclosure,” says Roth. “We’re asking, ‘Can an attacker figure out, from the information being released on the grid, what part of the network might be most stressed and most vulnerable to attack?'”

Missouri S&T is one of seven universities involved in the FREEDM Systems Center, a nationwide effort established in 2008 to begin building the smart grid. The FREEDM (Future Renewable Electric Energy Delivery and Management) Systems Center is based at North Carolina State University.

Much of the research under way through the center focuses on creating an “Internet for energy” that, according to the FREEDM website, “will transform the power industry in a similar way that the Internet transformed the computer industry from the mainframe computer paradigm to the distributed computing we have today.” Part of that vision assumes a growth in renewable energy use and creating the ability for energy users “to not only be a customer, but to also act as an innovator of energy.”

The project’s significant computer science component has to do with something called distributed grid intelligence, or DGI. The effort is led from Missouri S&T by Dr. Bruce McMillin. DGI is a crucial component for making the smart grid work. It is essentially the “brains” of the operation – the command and control center.

Working with McMillin are five graduate and Ph.D. students, one undergraduate student and one post-doctoral researcher, all from Missouri S&T. In addition, four faculty and their graduate students at institutions in Florida and Auckland, New Zealand, are involved with this project.

Other S&T researchers are focused on the power side of creating the smart grid. Led by Dr. Mariesa Crow, the Fred W. Finley Distinguished Professor of Electrical and Computer Engineering at Missouri S&T and director of the university’s Energy Research and Development Center, these researchers (Drs. Badrul Chowdhury, Jonathan Kimball, Keith Corzine and Mehdi Ferdowsi) are developing computer simulations that McMillin’s team will use as a testing ground for their cybersecurity algorithms.

To do that, the computer science researchers must also consider how a simulated network would interact with devices that plug in to the smart grid. These include distributed renewal energy resources – for example, rooftop solar panels that help provide energy to a home – as well as devices that consume power, such as appliances, computers and light fixtures. So they’re simulating devices, too.

Catanzaro, a junior computer science major from St. Louis, is relatively new to the FREEDM project, having just joined McMillin’s team in early 2012. Right now, he’s trying to write programs that simulate “plug-and-play” devices. One driving idea behind the smart grid – and consistent with the grid-as-network metaphor – is the concept that the grid would be able to recognize appliances that are plugged in to the network, just as your PC recognizes a USB device when it is plugged in to the port on your computer. The grid’s distributed intelligence would also be able to control appliance usage, so that if you program your dishwasher to run when overall electricity usage is at its lowest, that’s when it will run.

“Right now, the way we simulate these devices is not very realistic,” Catanzaro says. “They’re basically empty shells we use to send and receive messages.”

So there is work to be done to make sure that the future power grid is not only smart, but also safe and secure.