Building the ‘bridge to the future’

With 17 percent of Missouri’s bridges deficient and not enough resources available to repair and rebuild them, researchers at Missouri University of Science and Technology are more determined than ever to develop innovative and inexpensive materials that can replace these relic structures. 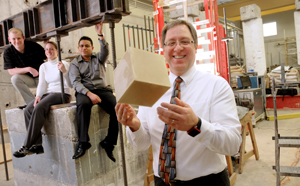 “A common saying for civil engineers is that we could build bridges that last forever, but we can’t afford it,” says Dr. Jeffery Volz, assistant professor of civil, architectural and environmental engineering at Missouri S&T.

The majority of the nation’s 600,000 bridges were built nearly 50 years ago using traditional materials, like steel, concrete and rebar. The structural integrity of these bridges, nearing the end of their lifespan, has been greatly reduced due to weathering, combined with wear from vehicle traffic and de-icing chemicals and reduced maintenance.

Over the last 15 years, newer designs have called for replacing the concrete and rebar with fiber reinforced polymers (FRP). Built with intricate honeycomb structures, glass carbon fiber bridge decks are strong, lightweight and corrosion resistant. Despite offering a longer life and lower maintenance costs, fiber reinforced bridges come with a higher price tag up front – nearly twice the cost of traditional structures – because the honeycomb structure is extremely expensive to construct.

That’s where Volz sees an opportunity. Using a $120,000 grant from the Missouri Department of Transportation matched with a $60,000 grant from the U.S. Department of Transportation, S&T researchers are exploring how high-density polyurethane foam could eliminate the need for the honeycomb structures. Sandwiched between FRP facings, polyurethane foam is often used in cars, planes and prefabricated buildings.

“We’re using a formulation of polyurethane foam that can withstand compression beneath a truck wheel,” he says. “By adding glass fibers to the polyurethane foam, we can get up to 1,000 psi.”

Built together in a factory, the sandwich deck panels could be shipped to site on trailers and are light enough that two workers could carry each panel. The team is completing their design and plans to test a prototype panel in the university’s high-bay laboratory this summer. The lab can accommodate testing of full-size bridge components.

“The foam and FRP panels offer the same cost as concrete but could live forever,” he says. “It should last until we have flying cars and don’t need bridges anymore.”