People with diabetes may one day have a less expensive resource for monitoring their blood glucose levels, if research by a group of Missouri University of Science and Technology students becomes reality.

Members of the Missouri S&T chapter of iGEM – the International Genetically Engineered Machine Foundation – recently devised a biological system that uses segments of DNA embedded in bacteria to detect glucose. The students believe their development could lead to a new type of test strip for diabetics. 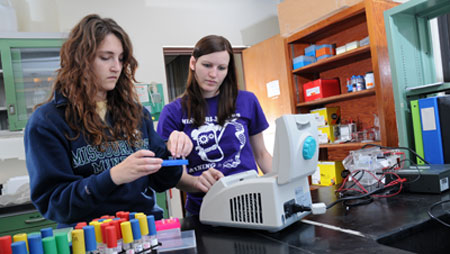 Biological sciences students Erica Shannon, left, and Amanda Foster are among the members of Missouri S&T’s iGEM chapter. The group developed a biological system to detect glucose levels, a process that could one day help people with diabetes.

“We designed DNA so that bacteria that have DNA would sense a change in osmolarity due to the presence of glucose,” says Erica Shannon of Wildwood, Mo., a senior in biological sciences at Missouri S&T and president of the campus’s iGEM chapter. Osmolarity refers to the concentration of a compound – in this case, glucose – in a solution.

For their project, the students designed genes that allow the bacteria – a non-virulent strain of E. coli – to sense the presence of the simple sugar glucose. The bacteria emit a yellow glow when glucose is present. As glucose concentrations become higher, the glow becomes brighter.

The team developed the system as part of an annual competition sponsored by iGEM, the Americas Regional Jamboree, held Oct. 8-10, 2011, in Indianapolis. S&T’s iGEM chapter received a silver medal for their effort.

According to Shannon, her team’s biological system could form the basis for new, less costly processes to help people with diabetes monitor their blood-sugar levels. It would require replacing the fluorescent gene with one that would cause the bacteria to change color based on glucose levels. This in turn could lead to the development of diabetes blood-test strips that could indicate glucose levels based on various colors. For example, a test strip might turn green if glucose levels are within normal ranges, yellow if borderline and red if elevated.

“All you would have to do is put the DNA inside a bacteria and you’ve got your test strip,” says Shannon.

“In the future, based on further research, an insulin gene could be added to this system for use in insulin pumps, where specific glucose levels trigger insulin production,” she says.

In addition to Shannon, other members of the iGEM team include:

The team advisors are Dr. David Westenberg and Dr. Katie Shannon, both associate professors of biological sciences at Missouri S&T.