Three NASA astronauts — all graduates of Missouri University of Science and Technology and veterans of the space shuttle program — will discuss their careers and the future of space exploration during an event on the Missouri S&T campus.

The event, titled “The Moon, Mars and Beyond: A Discussion With Three Astronauts,” will feature astronauts Col. Tom Akers, Dr. Janet Kavandi and Dr. Sandra Magnus. The event will be held from 2-3 p.m. Saturday, Nov. 12, in Leach Theatre of Missouri S&T’s Castleman Hall, 10th and Main streets in Rolla. All three astronauts will also sign autographs following the event from 3-3:45 p.m. in the Leach Theatre Lobby.

The event is free and open to the public, but tickets are required. Tickets, two per person, will become available to Missouri S&T students and the public beginning at 9 a.m. Thursday, Oct. 13, at the Leach Theatre Box Office in Castleman Hall.

Akers, Kavandi and Magnus are all veterans of NASA’s space shuttle program. 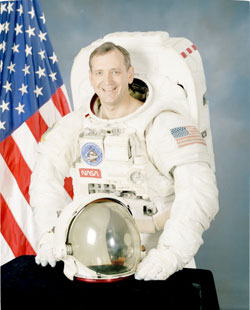 Akers, who earned bachelor’s and master’s degrees in applied mathematics from Missouri S&T in 1973 and 1975, was selected for the astronaut program in 1987 while serving in the Air Force. A veteran of four space flights, Akers has accumulated more than 800 hours of space flight, including 29 hours of space-walking experience. As a member of the maiden flight crew of the Space Shuttle Endeavour in 1992, he helped rescue and repair the stranded INTELSAT international telecommunications satellite. In 1993, he was part of a crew that captured the Hubble Space Telescope and restored it to full capacity through a record five space walks by four astronauts.

A native of Eminence, Mo., Akers also taught mathematics at Missouri S&T for 11 years before retiring in 2010. 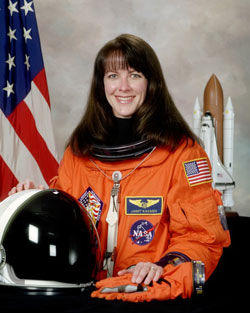 Kavandi earned a master’s degree in chemistry from Missouri S&T in 1982. A native of Carthage, Mo., she also holds a bachelor’s degree from Missouri Southern State University in Joplin. In 1990, Kavandi earned her Ph.D. in analytical chemistry from the University of Washington-Seattle. Selected as an astronaut candidate by NASA in December 1994, she has flown on three shuttle missions. Her first shuttle flight, in June 1998, was the final space shuttle docking mission with the Russian space station Mir.

In February 2000, on her second mission, Kavandi served aboard the Shuttle Radar Topography Mission, which mapped more than 47 million miles of the Earth’s land surface. She currently serves as director of flight crew operations for the Johnson Space Center in Houston. 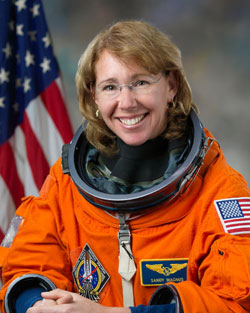 Magnus, a native of Belleville, Ill., earned a bachelor’s degree in physics from S&T in 1986 and a master’s degree in electrical engineering from the campus in 1990. She earned a Ph.D. from the School of Materials Science and Engineering at Georgia Institute of Technology in 1996. Selected by NASA in 1996, she completed her first space flight in 2002 aboard the Atlantis. Her second flight took her to the International Space Station, where she lived for more than four months, between November 2008 and March 2009.

Last July, she was a member of the Atlantis crew, which made the 135th and final mission of NASA’s space shuttle program.