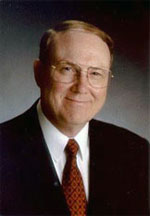 “Kent Wray is a proven and experienced academic leader and the right person to keep Missouri S&T moving forward as one of the nation’s leading technological research universities during our national search for the next chancellor,” Owens said during the announcement on the Missouri S&T campus.

“During his five years as provost, Kent has supported the team that led a highly successful student recruiting program during a particularly challenging time. Missouri S&T’s tremendous enrollment growth during this time is a testament to Kent’s strong leadership and commitment to the unique student experience at S&T, and I am confident as interim, Kent will build on the strategic initiatives outlined by Chancellor Carney.”

Wray will begin serving as interim chancellor on Sept. 1, following the retirement of S&T Chancellor John F. Carney III on Aug. 31 after leading the Rolla campus for the past six years.

“It’s been my pleasure to work with Kent during five of my six years at Missouri S&T,” Carney said. “During that time, Kent has directed a number of important initiatives, including our strategic planning process and the restructuring of our academic administration. Both efforts have resulted in a more collaborative and effective atmosphere for learning and research. Missouri S&T will be in very good hands under Kent’s leadership while the search for the next chancellor continues.”

“This is an exciting time for Missouri S&T, with tremendous opportunities for continued growth on the horizon,” Wray said. “We have several important initiatives under way, and I’m excited to continue the momentum we have gained under Jack’s leadership. In the coming months, my colleagues and I plan to focus on strengthening our campus’s e-learning initiatives to reach more non-traditional students, as well as redesigning some existing courses to better utilize technology to improve learning outcomes; expanding recruitment efforts both nationally and internationally; building on our existing research initiatives; and continuing to raise awareness of Missouri S&T as one of the nation’s leading technological research universities.”

During Wray’s service as interim chancellor, Dr. Robert W. Schwartz will serve as interim provost. Schwartz currently serves as vice provost for academic affairs, a position he has held since June 2007.

In April, Owens appointed a search committee to find Missouri S&T’s next chancellor. Information about the search process is online at chancellor.mst.edu/search.