A former bread factory’s transformation into a home for Missouri University of Science and Technology’s award-winning design teams is now complete. The university’s new Kummer Student Design Center will be formally dedicated on Friday, May 20. 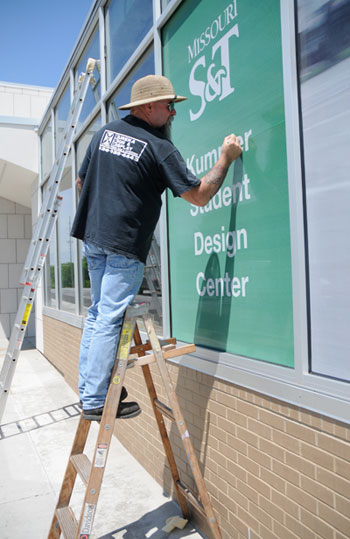 Window clings are installed in preparation for the May 20 dedication of the Kummer Student Design Center.

The new facility is located on the corner of U.S. Highway 63 (Bishop Avenue) and 10th Street. The dedication ceremony will be held at 1:15 p.m. Friday, May 20, and will include remarks by Chancellor John F. Carney III. The public is invited to attend.

Parking for the event will be available behind the center, on the corner of 10th and Spring streets. Access to the Kummer Student Design Center from U.S. Highway 63/Bishop Avenue will be blocked throughout the day and evening of May 20.

The $2.75 million project was funded entirely through private gifts to the university, including a $1.25 million gift from Fred and June Kummer of Huntleigh Village, Mo. Fred Kummer is a 1955 civil engineering graduate of Missouri S&T and the CEO of St. Louis-based HBE Corp.