For decades, it was routine for dry-cleaning operations to pour chemicals down the drain. Unfortunately, some of those chemicals ended up contaminating groundwater.

And that’s what happened years ago at the Busy Bee laundry facility in Rolla. But, thanks to the efforts of Erica Collins and others, a comprehensive clean-up is under way. 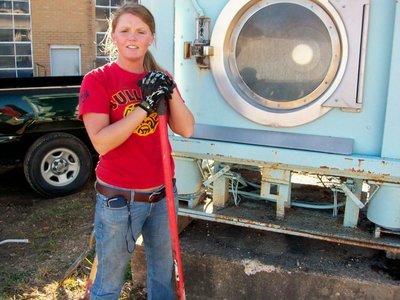 Collins is a graduate student in geological engineering at Missouri University of Science and Technology. She installed a pump at the site to pull the contaminated water from the ground. The pump is powered by solar energy. Collins checks on it multiple times a day.

The water is treated or “cleaned” and then safely put back down the drain.

According to Collins, the contaminated water, while an environmental problem, never posed a threat to people. “It’s 5-to-15 feet into bedrock,” she says. “It was not going to make people sick.”

Busy Bee owner Harold Robertson is paying for the clean-up, but he will be reimbursed through the Dry Cleaning Environmental Response Trust Fund administered by the Missouri Department of Natural Resources.

According to Elmore, the drinking water in the United States is among the best in the world, thanks to regulations, monitoring and clean-ups when there is a potential problem. “Rolla’s drinking water is safe from the tap,” he says. “You don’t have to worry about it.”

On May 24, 2011. Posted in Geological Sciences and Engineering, Research, Top Headlines