The railroad industry’s 40-year conversion from steam to diesel power during the 20th century may offer clues for the auto industry as it attempts to develop alternatives to gas-powered vehicles, says a historian at Missouri University of Science and Technology. 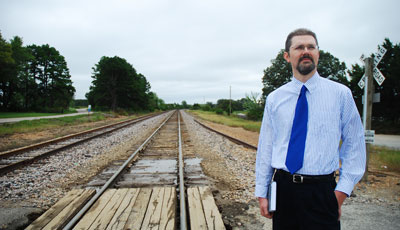 Jeff Schramm, associate professor of history, is the author of a new book about the railroad industry’s transition from steam to diesel power.

For one thing, the transition from the heavy steam-powered locomotives that dominated the U.S. railroad industry in the early 20th century may not have happened if not for government regulation, says Dr. Jeff Schramm, associate professor of history at Missouri S&T.

“Governmental regulation does have an important role to play in some industries,” says Schramm, whose new book, Out of Steam: Dieselization and the American Railroads, 1920-1960, was published in September by Lehigh University Press. “It provides that little spark that is needed to encourage research and development.”

In Out of Steam, Schramm examines the technological, social and economic impact of the railroad industry’s move to diesel power. While railroads generally moved to the diesel-electric locomotive to control costs, different railroads adopted various strategies for doing so. Throughout the transition, government had a hand in furthering the development of the diesel locomotive.

The earliest transition from steam locomotives was a direct result of municipal legislation regulating smoke in New York City, Schramm explains. Because of these regulations, railroad companies began experimenting with diesel-electric engines.

The breakthrough for diesel locomotives came in the 1930s with the advent of the streamliner passenger trains, says Schramm. “By then, you had more reliable engines, you had big money behind it, and you had the research and development support to create a more powerful and reliable engine.” 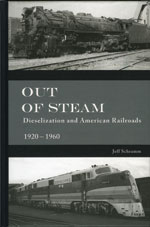 General Motors was one of the big companies behind the development of the diesel engine, Schramm says. Once again, the government played a role in the R&D effort, but more as a customer than as a regulator. GM was building diesel engines for Navy submarines and leveraged that effort to improve the product for the railroads.

“GM had the deep pockets,” Schramm says. “They could afford to do the R&D. They also had a long-term outlook.”

Even though diesel gained traction in the 1930s, it wasn’t until after World War II that the diesel-electric locomotive would begin to pull away from the steam-powered engines. The war effort “created a huge demand for more locomotives,” but at the same time copper – essential for the diesel engine’s electric components – was scarce. The federal government controlled the allocation of locomotives and moved diesel locomotives to the western part of the nation, where they would perform more efficiently than steam engines. Steam engines required water, which was in short supply in the western U.S.

“By the end of the war, diesels had proven that they were just as capable as the steam engine,” Schramm says. “Within a couple of years, no one was buying steam engines anymore.” The last steam engine was built in the United States in 1950, Schramm says.

While the transition from steam to diesel ultimately was a business and technological success for the railroad companies, it had a heavy economic and social toll on many communities. In Missouri, towns like Newburg, once a bustling midway point between St. Louis and Springfield, “existed to serve steam engines,” Schramm says. “As soon as the diesel engine comes along, the trains run from St. Louis to Springfield non-stop.”

Some occupations, like the firemen who managed a steam engine’s output, became obsolete – though not immediately, Schramm says. “They had a good union, so they kept their jobs for a while. They tried to recast themselves as co-pilots, but in the end they weren’t very successful.”

Schramm specializes in the history of technology with an emphasis on modern industrial technology. He has been on the Missouri S&T faculty since 2002. Currently on research leave from the university, he is conducting research for his next writing project, a history of the U.S. Bureau of Mines.

On September 17, 2010. Posted in Department of History and Political Science, Top Headlines