Thank you, Chancellor Carney, for that kind introduction. Thank you members of the Board of Curators, faculty, parents, family and friends, and the Class of 2010. 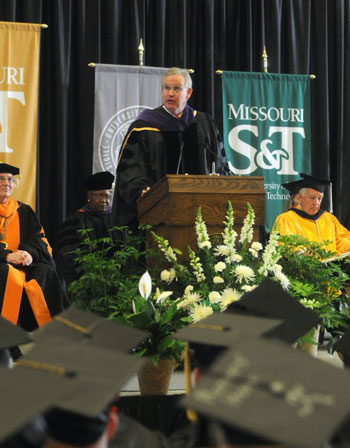 Congratulations on your graduation!

Missouri S&T has a long tradition of academic excellence and scholarly achievement that goes back 140 years. Over that time, the university has been transformed into one of the top technological research institutions in the nation, with a name change that reflects its broadened focus on the full spectrum of scientific endeavor.

The growth and development of this campus took significant investment, not just in buildings and laboratories, but in intellectual capital – the distinguished faculty here today.

It also took close collaboration between academia, the private sector – thank you, donors – and government.

I’d like to acknowledge the key role that members of the Missouri Congressional delegation and the Missouri Legislature have played in providing the resources to lift the profile and accelerate the growth of this fine university, including my good friend – and the university’s good friend, Senator Frank Barnitz.

Nobody works harder, or gets more done, for higher education, for agriculture and for economic development in this part of our state than Senator Barnitz.

As Chancellor Carney said, this ceremony symbolizes both your past…and your future.
The past?

Late nights in the library, and weekends in the lab.
Mid-terms and finals.

But the future is what I’d like to talk about with you this morning, specifically the future that you, the class of 2010, will be creating from the moment you step off this campus and into the real world. In our rapidly changing world, education is a high-stakes enterprise. There is no investment that will have a greater impact on the future of this nation, this state and on the quality of life for you, your children and grandchildren, than the one you have made in your education today.

As graduates of a top-tier, public technological research university – ranked 12th in the nation, the last time I checked − you are uniquely equipped to compete in the 21st Century economy.

Missouri S&T’s enrollment statistics over the last decade are a dramatic reflection of this school’s high status, and the changing demographics of this university.

These are striking numbers, and a clear indication that the word is out about Missouri S&T.

The outstanding education you have received here is something no one can ever take away from you, whether you majored in physics or philosophy. And the world needs both, you know.

The value of your Missouri S&T education is also reflected in some very concrete numbers.

Missouri S&T has built a strong reputation as a resource for talented new employees, with Fortune 500 companies willing to pay top dollar for S&T graduates. Last year, PayScale Inc. ranked Missouri S&T fourth among Midwestern universities in terms of starting salaries, with students earning an average of $57,300 − straight out of college.

You can exhale now. They’re not moving back in. And if they do, you can charge them rent.
Most Midwesterners don’t like to brag on themselves; it goes against our grain. But since we’re the Show-Me State, let me do a little bragging on Missouri S&T past graduates, because the alumni roster is truly inspirational.

It includes:
— Steve Sullivan, the Director of Research and Development for George Lucas’ Industrial Light + Magic, who won an Academy Award for technical achievement.
— Joan Woodard: executive vice president of Sandia National Laboratories in New Mexico.
— And, of course, Gary Forsee, former chairman and CEO of Sprint/Nextel, who is now president of the University of Missouri System.

The ranks of your alumni also include three astronauts: Tom Akers, Sandra Magnus, and Janet Kavandi.

As we look to the future, it’s important to remember a fundamental lesson of American history. Our country did not send three Missouri S&T graduates into space by thinking in increments. Great American innovations − the light bulb, transistors, magnetic resonance imaging, the Internet – were not the work of men and women who embraced the status quo.

Our nation leapt to meet the high expectations of its leaders, and by God we hit the mark. What looks like destiny today, was mere aspiration yesterday.

The Space Race did far more than land a man on the moon. It created tens of thousands of new jobs for Americans, making things that never even existed before.

It gave rise to a revolution in computing and communications. It generated a whole series of innovations from freeze-drying to advanced materials to digital signals processing, which later became part of CAT scans and MRIs.

Our country needs that kind of vision and drive again. We are counting on your generation to revive and harness that restless American spirit of innovation.

If the past 50 years of science, discoveries were focused on growth; the next 50 will be focused on sustainability.

Over the last 50 years, we have lost 25 percent of the world’s topsoil, one-third of its forests and one quarter of its agricultural land. All while human population continues to grow.

Here’s what Hugh Grant, the CEO of Monsanto, had to say about his St. Louis-based company’s mission in 2008:

“Growing twice as much on about the same footprint of land, with a third less resources consumed. If you can do that without chopping down another tree, that’s the definition of a good day.”

And take a look at some of the world’s most important emerging technologies, according to the M.I.T. Technology Review:
— Genetically engineered microorganisms that can turn sunlight into ethanol or diesel, allowing biofuels to compete with fossil fuels in cost and scale.
— “Green concrete” that absorbs more carbon dioxide than is released during its manufacture and could greatly reduce global carbon emissions from cement production.
Think about you we see in the news. Climate change. Oil spills. Hydrogen-powered cars. Clean coal. These are some of the tremendous challenges facing your generation.

Then there’s the cool bionic stuff, like implantable electronics that can deliver drugs, stimulate nerves and monitor biomarkers – and once they’ve done their job, virtually dissolve.

And the just-plain-crazy stuff, like Mobile 3-D, so you can watch Avatar on your cell-phone – hopefully not while you’re driving home on Highway 63.

Class of 2010, the frontiers of discovery are infinite in all directions. It’s critical to the future of Missouri, and the future of our nation, that academia, industry and government maintain a strong, working partnership that is focused on innovation.

So where do we stand on that front?

Every two years, the National Science Board releases its Science and Engineering Indicators report.
This year’s report said that although the state of science and engineering in the U.S. is strong, our global lead is slipping. America still holds a preeminent position in science and engineering, because we have historically made significant public and private investment in education, research and design.

Missouri S&T is a case in point. In the last year alone, research expenditures have increased nearly 22 percent, which increases in every category of sponsored research.

But U.S. dominance is being challenged by nations, especially in Asia, that are pouring a growing share of their gross domestic product into research and development.
Where does Missouri fit into this picture?

With 4,000 bio-tech, agribusiness and life science companies, Missouri is a recognized leader in biotechnology, and a growing international center of biopharmaceuticals, biomedical research and plant science. Missouri currently ranks fifth in National Science Foundation funding for the life sciences.

And Missouri continues to see steady growth in the number of jobs requiring a bachelor’s degree or better in science and engineering. That’s good news for you, graduates.

As Governor, I am committed to doing everything I can to continue to spur growth and investment in science and technology, and to recruit more high-tech companies to Missouri, like Boeing, Synbiotics and Cerner.

And just as important as job growth, are the corollaries of that growth, including:
— opportunities for synergy;
— the creation of a culture of excellence and collaboration;
— a forum where brilliant minds find kindred spirits;
— a hotbed of ideas that spark innovation;
— and a nexus of risk and reward, where start-ups can thrive.

Not only are there new opportunities and new frontiers for you to explore. There also are new ways to explore them. The key word here is collaboration.

Cutting-edge scientific research is fast-becoming a global enterprise, carried out by interdisciplinary teams of scientists with an emphasis on collaboration, transparency and openness.

On the edge of the Red Sea, King Abdullah of Saudi Arabia has placed a ten-billion-dollar bet on collaborative research teams, creating the world’s youngest university, which goes by the acronym KAUST.

These teams will take on the big questions in science, and tackle the global challenges confronting mankind – from sustainable energy, to desalination of seawater, to climate change.

Businessweek reports that IBM is “prowling the world to set up what it calls collaboratories, which match up its researchers with experts from governments, universities and industry.”

There is no doubt in my mind that Missouri S&T scholars will be major players in these global brain trusts – and form their own.

Graduates, I would be remiss if I didn’t tell you that now is the time to spread your wings…to go out and conquer the world…to get as much experience as you can, wherever the opportunity presents itself.

Get out there and explore. That’s what your parents and professors are supposed to say, too.

But I’ll be honest. And I think I speak for all of us here today.
We don’t really want you to leave.
We need your talent.
We need your skills.
We need your brainpower.
When I look at you, I see the makings of a science and technology juggernaut. I want you to help Missouri lead the nation in innovation, and create a vibrant future for the people of our state – and the people of the world.
Go…if you must.
But remember where you came from.
And when you are ready to launch your own start-ups with some of your old roommates from Missouri S&T, come home to Missouri.
The future is in your hands.
Make it bright.
Congratulations.
Thank you.