Missouri S&T is known for its success in collegiate human-powered vehicle racing. And much of that success stems from the engineering work that goes into designing and building the aerodynamic vehicles, which are recumbent (sit-down) bikes with removable shells. 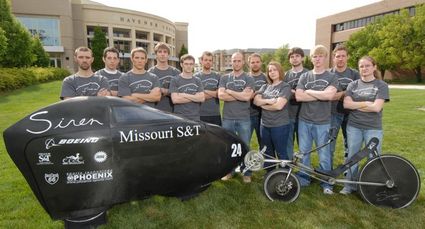 “I think our vehicle intimidates other teams,” says S&T’s Trent Lauer, a junior in electrical engineering from Rolla. “They were calling it the Batmobile and saying it was scary that you couldn’t see inside.”

The team will now prepare for the East Coast competition May 7-9 at Central Connecticut State University. Annual events on both coasts are sponsored by the American Society of Mechanical Engineers.

This fall, Metcalf will be among the riders trying to establish new speed records at the World Human Powered Speed Championship in Battle Mountain, Nev. She hopes to go more than 60 mph.