Whittney Metcalf, a senior at Missouri University of Science and Technology, is probably the fastest female in collegiate human-powered vehicle racing.

Last year, Metcalf won sprint events at two human-powered vehicle competitions sponsored by the American Society of Mechanical Engineers. She holds the ASME female record for a quarter-mile sprint with a recorded speed of 41.81 mph. 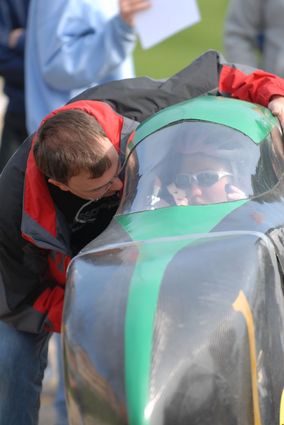 This year, Metcalf and her teammates are participating in co-ed racing competitions April 23-25 at California State University, Northridge, and May 7-9 at Central Connecticut State University.

In September, a smaller group of S&T students will travel to Battle Mountain, Nev., to participate in the World Human Powered Speed Championship. Every fall, some of the fastest racers in the world try to push their limits on a long stretch of flat roadway in the high desert.

Metcalf, a petroleum engineering major from Ulysses, Kan., is hoping to establish a new collegiate female record in Nevada by going more than 60 mph. David Long, a sophomore in aerospace engineering from Lawrence, Kan., will also ride during the week-long Human-Powered Speed Championship.

Andrew Sourk, a graduate student in aerospace engineering from St. Joseph, Mo., is leading the design of a brand new vehicle for Battle Mountain. Sourk also did engineering work on the bullet bike that Missouri S&T graduate Jerrod Bouchard used during the 2007 World Human Powered Speed Championship. At that event, Bouchard became the second-fastest college student ever timed in a human-powered vehicle.