Dr. Delbert Day, Curators’ Professor emeritus of ceramic engineering at Missouri University of Science and Technology, was one of six individuals honored recently by the University of Missouri Alliance of Alumni Associations and Extension for outstanding service. 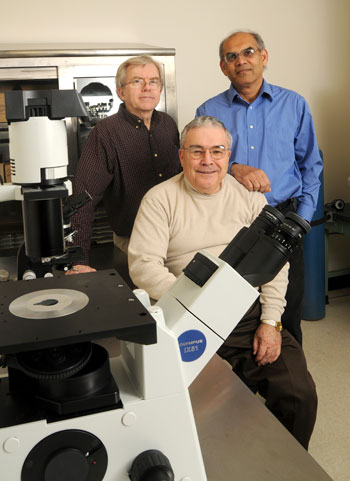 Day has served Missouri S&T for nearly 50 years in various teaching, research and administrative capacities. Day earned a bachelor’s degree in ceramic engineering from the Missouri School of Mines and Metallurgy, now Missouri S&T, in 1958. He also earned a master of science degree and doctorate in ceramic technology from Pennsylvania State University in 19609 and 1961, respectively.

An expert in developing specialty glasses, Day is best known for co-inventing radioactive glass microspheres, now marketed under the brand name TheraSphere, which are used commercially in the United States and Canada to treat patients with liver cancer. The treatment consists of injecting millions of the tiny beads – each one about half the thickness of a human hair – into the main artery supplying blood to the liver. The beads then deliver localized radiation to malignant cells without harming healthy tissue.

Day is currently a senior investigator at the Graduate Center for Materials Research. He served as director of that center from 1983-1992.

During his tenure at Missouri S&T, Day has published more than 360 papers, edited three books and received 45 patents. He is also the recipient of many honors and awards, including the university’s Presidential Award for Research and Creativity and Missouri S&T’s Curators’ Distinguished Professor Award.

Day was elected to the National Academy of Engineering in 2004 in recognition of his development of the TheraSphere beads. He also is co-founder of Mo-Sci Corp. in Rolla, Mo., which manufactures specialty glass products used in the transportation, electronics, sporting goods, aerospace and health care industries.