While most Americans connect the Quaker religion to the colony of Pennsylvania, the true Quaker colony of the Western Hemisphere in the 17th century was the West Indies island of Barbados, writes Dr. Larry Gragg in a new book examining how members of that religion dealt with daily life in an economy based on slave trade. 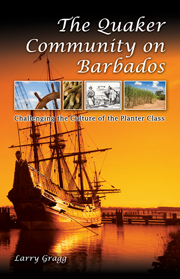 The Quaker Community in Barbados is the latest book by Missouri S&T history professor and chair Dr. Larry Gragg.

“Almost no one associates Quakers with Barbados,” says Gragg, chair of history and political science at Missouri University of Science and Technology and author of The Quaker Community on Barbados: Changing the Culture of the Planter Class, published recently by the University of Missouri Press.

But prior to the Quakers’ large-scale migration to Pennsylvania, Barbados had more Quakers than any other English colony, Gragg says.

Focusing his study on the 17th century, when the Quakers were most numerous and active on Barbados, Gragg examines how members of that religion – formally called the Religious Society of Friends and also known as “Friends” – confronted material temptations and tempered founder George Fox’s admonitions regarding slavery on an island that was the first port of call for ships transporting slaves from Africa to the New World.

Drawing on wills, censuses, levy books, letters, sermons and journals, Gragg describes how Barbados’ Quaker community sought to implement their beliefs in peace, simplicity and equality in a culture ruled by a planter class that had built its wealth on the backs of slaves. He reveals that Barbados Quakers were a key part of a transatlantic network of Friends and explains how they established a “counterculture” on the island to challenge the practices of the planter class.

Fox established the Society of Friends in 1652 in England, Gragg points out, and over then next few years, the Quakers sent many “itinerants,” or missionaries, to Barbados. “Their call was to go out to the New World and convert people,” Gragg says. “They felt they had to take their faith everywhere in the English-speaking world. Most who kept a journal said they had gotten a call – that God told them they had to go to this place.”

In Barbados, the Quakers experienced great success – at least for a couple of decades. The reason, Gragg says, was the “simple message” of their religion.

“They had a very simple message and it was very reassuring,” Gragg says. “Their message was that everyone had the ‘inward light’ and that everyone was assured of salvation. That wasn’t the case with the Church of England.

“Even some of the wealthiest planters went to the meetings and walked away converted,” he says.
By the time a census was taken in 1680, some 500 of the 20,000 white people on Barbados were Quakers, Gragg says.

Despite their efforts, the Quakers failed in their experiment to transform the culture of Barbados. By the 1790s, the Quaker presence on that island had vanished. “Many of them simply just moved to Pennsylvania,” Gragg says.

Persecution drove others from the island. Many faced arrest for refusing to serve in the militia, not supporting the Church of England, not paying taxes and keeping their stores open on holy days, Gragg says. They also tried to convert slaves, leading to the passage of laws prohibiting the act.

“What bothered many people about the Quakers was that they allowed women to be itinerants,” Gragg says, adding that many of the journals he read were written by women.

Despite their founder’s admonitions against slavery, many of the converted plantation owners continued to be slave holders, Gragg writes. The denomination itself was struggling with the issue of slavery.
Ultimately, the Quaker movement on Barbados “ended with a whimper,” Gragg writes.

“They challenged the very powerful plantation power structure and lost,” he says. “It was an extraordinary challenge, but today there’s little evidence that they had much impact. But they did have the local government frightened for two decades.”

The Quaker Community on Barbados is Gragg’s second book about the island. His first, titled “Englishmen Transplanted: The English Colonization of Barbados, 1627-1660,” was published in 2003 by Oxford University Press. Gragg says the research he conducted for that book led him to delve into his study of the Quakers on Barbados.

Previously, Gragg has written about the Salem Witch Trials and is now writing a book about the perceptions of Las Vegas in popular culture.

On July 13, 2009. Posted in Department of History and Political Science, News, Top Headlines