Missouri S&T computer teams can hack it in competition 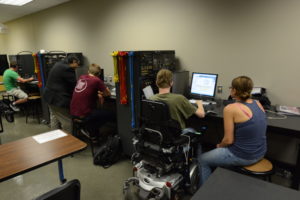 Missouri University of Science and Technology will kick off a Golden Jubilee celebration marking the 50th anniversary of its computer science department with a competition designed to help society through computing.

The Hackathon for Humanity (H4H) contest kickoff runs from 12:30-1:30 p.m. on Thursday, Sept. 3, in Room 209 of the computer science building with live streaming for remote participation. For more details, see the H4H website.

As part of the Golden Jubilee, teams have 19 days to create a mobile app for iOS or Android or a web app that is beneficial to society. Examples are a grant finder, which could be used to create a web page where grants can be easily accessed and where organizations can share their experience in trying to obtain funding. Another is a climate impact visualizer, an app that gives a visualization, infographic and animation of how the environment is changing.

Any Missouri S&T students, alumni, faculty and staff are eligible to form teams. Teams can be based on campus, from remote locations, or, preferably, a mix of local students and remote alumni. The official rules can be found here. To entice participation, $2,000 in prize money will be given out, with $1,000 for first place, $600 for second and $400 for third.

“The primary goal is to engage both our alumni and our students by having them collaborate on mixed teams creating apps for the common good,” says Dr. Daniel Tauritz, associate professor of computer science and H4H coordinator. “While we have absolutely no clue how many will participate, it potentially could be thousands.”

And Tauritz says not to worry — national secrets are not at risk during the hackathon.

In the case of the Hackthon for Humanity, hacking will involve the design and coding of computer apps along with promotional and explanatory YouTube videos.

The competition ends Sept. 21, with judging Sept. 22-30. Winners will be announced Oct. 1. Videos of winning projects will be shown in Leach Theatre of Castleman Hall, 10th and Main streets in Rolla after Golden Jubilee keynote speaker Tan Le’s keynote address that begins at 3 p.m. Le is an entrepreneur and computer science pace-setter who has designed a computer-brain interface.

On September 1, 2015. Posted in College of Engineering and Computing, Computer Science, Events, Featured